Ulster for your holiday, The Ulster Tourist Development Association Ltd., 1939 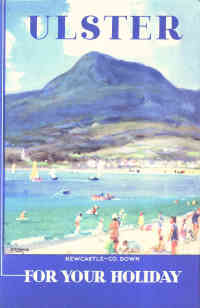 First published in 1939 and republished here in fully-searchable electronic format is Ulster: The Official Publication of the Ulster Tourist Development Association, Ltd. Containing some 286 printed pages, this publication was the complete tourist guide to the Province of Northern Ireland in the year that it was issued. The forward to Ulster was written by The Right Hon. Viscount Craigavon, Prime Minister of Northern Ireland, and in this he stated that he was confident that the entire world had heard of Ulster's shipyards, linen industry, thread and rope work factories, but remained largely ignorant of the many 'restful beauties' that the Province had to offer. The Province as a whole offered the prospective tourist and infinite variety and in its history and myths and legends many of which were still kept alive in the countryside, Ulster could offer every potential visitor something of interest. The Tourist Guide to Ulster is introduced by a short general history of the Province together with the modes of transport available to the prospective visitor both to get to Northern Ireland and once arrived to travel around the province. All possible means of travel are included here from rail to car to ferry to motor cycle and by foot. At each junction the price and availability of travel options is given and this section is replete with advertisements that may be of interest to many readers. From this point onward the Ulster Tourist Guide presents a plethora of facts, topographic, historical and archaeological facts on each of the six counties of the Province, making this something more than your average tourist guide. Beginning with Belfast, written by Alfred S. Moore, a picture of Belfast's origins and history is painted for the reader intended to both excite and to leave one in no doubt that this was a capital of considerable note. Accompanied by a large fold-out street map with sketches of some of the most notable sites in Belfast such as the Botanic Gardens and the Harland and Wolff ship and engine works, this chapter as all the others includes dozens of black and white photographs. Chapter two, Antrim, was written by Alexander Riddell and is introduced by a brief historical sketch of the county before the reader is availed of the history and attractions of the county's chief resorts - both seaside and historical - of interest. Beginning with Carrickfergus, the Guide then travels around and across the county visiting such places of interest as Carrickfergus, Kilroot and Swift, Whitehead and Islandmagee, Larne, Ballygally, Glenarm, Carnlough, Cushendal, Cushendun, Ballycastle, Bushmills, The Giant's Causeway, Portballintrae, Dunluce Castle, Portrush - a child's paradise - Ballymoney, Ballymena, Antrim and Lisburn. The chapter is packed full of photographs of each destination and is once again jammed full of advertisements, poetry, historical interests and descriptions. This level of detail is present in the Guide for the remaining counties of the Province. Ulster: A Tourist Guide is concluded with sections on the Province's archaeology and ancient monuments, and index to the numerous advertisements carried throughout the Guide as well as a detailed tourist map of the Province that illustrates and accompanies the text. At the time of publication this was the guide to Ulster and is now a rare and sort-after collectors item.