Slater's Royal National Directory of Ireland, 1894: Compendium of all Sections 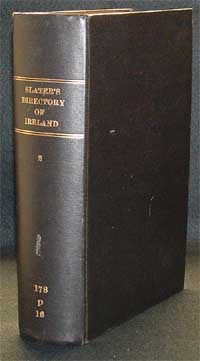 Slater's Royal National Directory of Ireland was published in two volumes in Manchester and London in 1894 and encompasses over 2,500 pages of text, and more than 300,000 names. Information contained in the Directory is subdivided into provinces and further subdivided into provinces with entire sections given over to the cities of Belfast and Dublin, and extended sub-sections for Cork, Limerick and Galway. Each county and city is introduced by a brief social and political history as well as topographical and geographical descriptions. For those familiar with the study of Irish history and in particular Irish genealogy, directories such as Slater's are a vital research tool. The principal value of Slater's Royal National Directory of Ireland for 1894 lies in the fact that only a handful of truly national Irish directories are available and this edition is the most comprehensive available. The Directory contains national lists for the principal gentlemen's seats and their incumbents, the villages, towns and other places mentioned together with a national list of advertisers appearing throughout the publication, which might prove of particular interest to some readers. Each town and village contained in the Directory is introduced by its geographical location in relation to its nearest railway station together with population statistics derived from the 1891 Census of Ireland as well as a brief geographical and topographical description. The Directory provides the names and addresses of the principal private residents, together with those engaged in commercial and agricultural activity as well as the presence and location of religious, commercial and public institutions. The current edition is only one nine national directories for Ireland prior to the twentieth century. For the cities of Dublin, Belfast, Cork, Limerick and Galway, Slater's Directory is as fulsome in its detail as Thom's Dublin City and County Directory is for the capital and its suburbs, which in the case of Galway and Cork is of particular importance as these major cities have attracted few complete directories. Dublin, Belfast, Cork, Limerick and Galway are provided with complete street directories as well as lists of gentlemen, nobility, merchants and traders. Like Thom's, Slater's provides a list of trades and those engaged in them as well as the principal private and public institutions. This edition of Slater's was the first time that farmers were listed in any national directory, thus making it especially valuable as a research tool. The current two-volume publication is fully searchable and is a must for the bookshelves of anybody interested in the residents of Ireland shortly before enumeration of thee 1901 Census of Ireland. This version contains all four provinces, the large scale and detailed 1894 map of Ireland and all other pages appearing in the two volumes. These provincial sections can be purchased separately, to reduce the cost to you, and appear on the relevant county pages.