Index to the Act or Grant Books, and to Original Wills, of the Diocese of Dublin 1634-1858 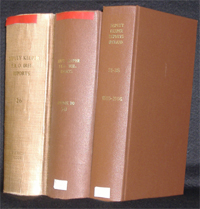 Deputy Keeper of Ireland, Index to the Act or Grant Books, and to Original Wills, of the Diocese of Dublin 1634-1858, 26th, 30th and 31st Reports, 1894, 1899 Previous to the establishment of the Irish Public Records Office (PRO), by an 1867 statute (30 & 31 Vict., c. 70), Ireland's public records were located in a variety of repositories throughout the country. Many of the records were perilously stored in unsuitable conditions, and on the opening of the PRO, records were progressively transferred to the new repository, for safe keeping. Each year, between 1869 and 1920 (and less frequently thereafter), the Office published an annual report, known as the Deputy Keeper's Report, which detailed the records received, and the work undertaken, during the previous twelve months. Though little known, these reports can contain useful source material for the historical researcher. Although the reports were usually brief, they often contained copious appendices, which can be especially useful. This is particularly the case, bearing in mind the destruction of the PRO during the Irish Civil War, so the Deputy Keeper's reports now often represent the only record of lost primary source material. Some of the more useful of these reports for the genealogist or local historian are the volumes which contain indexes to the Grant Books and original wills of the Dublin diocesan court. That diocese is very expansive, covering all of County Dublin, most of County Wicklow, large stretches of east and south Kildare, and lesser parts of Counties Carlow, Queen's and Wexford. Previous to 1858 (20 & 21 Vict., c. 79), responsibility for testamentary jurisdiction (adjudication on disputes regarding succession and matrimony) lay with the Anglican ecclesiastical authorities, and, hence, items such as wills, probate issues, and marriage licences and bonds had to be registered with each diocese's Consitorial Court. Once registered with the court, the will or bond was indexed, since it might subsequently be required, in the event of a dispute. With the increased interest in genealogy during the latter half of the nineteenth century, these various copious indexes attracted the attention of researchers, and many were published. Indexes to the Dublin Grant Books were published in more than 2,200 pages, in appendices to two volumes of the Deputy Keeper's reports, with one appendix (vol. xxvi) covering the period before 1799, and the other appendix covering the post-1800 period (vol. xxx). When the pre-1800 index was being prepared, some of the original manuscripts were missing, so that index was part-compiled from a previously-made transcription. Later, the original manuscripts were located, and corrections to the pre-1800 index were subsequently published (vol. xxxi, pp 39-82). In total, the combined indexes contain more than 125,000 entries, and even more names. The indexes are presented in a convenient, four-column format, although the data in the fourth column is now superfluous. The first column, ordered alphabetically, by surname, contains details of the name and address of the person(s) named in the record, and often also contains ancillary information, including, usefully, occupations. The second column records the year in which the record was registered with the Court, and the third column indicates the nature of the record. Users are advised that an explanation of the contractions used in the third column is provided in the brief introduction to both indexes, and it is strongly advised that the introduction to either index is read before the source is used. Although the data presented in the indexes is limited, the lists have an added significance for the genealogist or social historian, because most of the original records were located in the PRO in 1922, and were consequently lost. Thus, these indexes now represent the only record of events which could otherwise not now be identifiable. This republication includes all components of the original idexes: * the pre-1800 index and the subsequent corrections (appendices to vols xxvi and xxxi), * the 1800 to 1858 index (appendix to vol. xxx). Although the data is alphabetically presented, and is easily navigable, this publication has been made fully searchable, as an added convenience for the user. This publication is highly recommended for researchers who are involved either in genealogical/family-history research or in studying the social history of Dublin, and east Ireland.