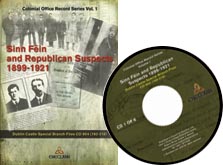 Eneclann presents a first time publication of the Dublin Castle intelligence files on individual Sinn Fein and Republican suspects between 1899 and 1921. Also known as the ‘personalities files’, these RIC Special Branch files contain secret intelligence on over 440 individual suspects who were under surveillance, including Eamon de Valera, Michael Collins, James Connolly, Roger Casement as well as many ordinary individuals. A fascinating insight into the manner and motives of the British administration during this period which covers Home Rule agitation, the outbreak of World War I, the 1916 Rising and the War of Independence. The series runs from 1899 right through to the Treaty in 1921 and is an essential source for any detailed examination of the period. The originals of this series are held in the National Archives in Kew where they are kept under Colonial Office Record Class CO 904; in this publication we have reproduced the microfilm version of boxes 193-216, which runs to over 19,000 pages. The originals were released in 1997 under the 70-year rule. The publication contains an in depth introduction by Dr Fearghal McGarry, Queen’s University Belfast.

The Journal of the Association for the Preservation of the Memorials of the Dead Vol IV for the years 1898-1900. 1900