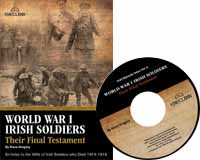 There is an increasing recognition of the significance of Irish participation in World War I. Over 200,000 Irish men served in the British armed forces during the war and of them the Committee of the Irish National War Memorial has recorded 49,000 deaths. This publication contains an index to the wills of 9,000 Irishmen in the British armed forces who died during the conflict 1914-1918, it is a tribute to their sacrifice but also sheds light on the realities and details of that sacrifice. During the war soldiers sent to the front line were encouraged to write their last will and testament, if they did not survive these wills were registered, 9,000 of these wills are deposited with the National Archives of Ireland (NAI). Since some of the original images were released on the NAI web site, this index has become much more important, as it is the only structured way the records can be searched. It also includes all those items not yet released by NAI.

Personal Experiences of the Great War (an Unfinished Manuscript). 1925