Personal Experiences of the Great War (an Unfinished Manuscript). 1925 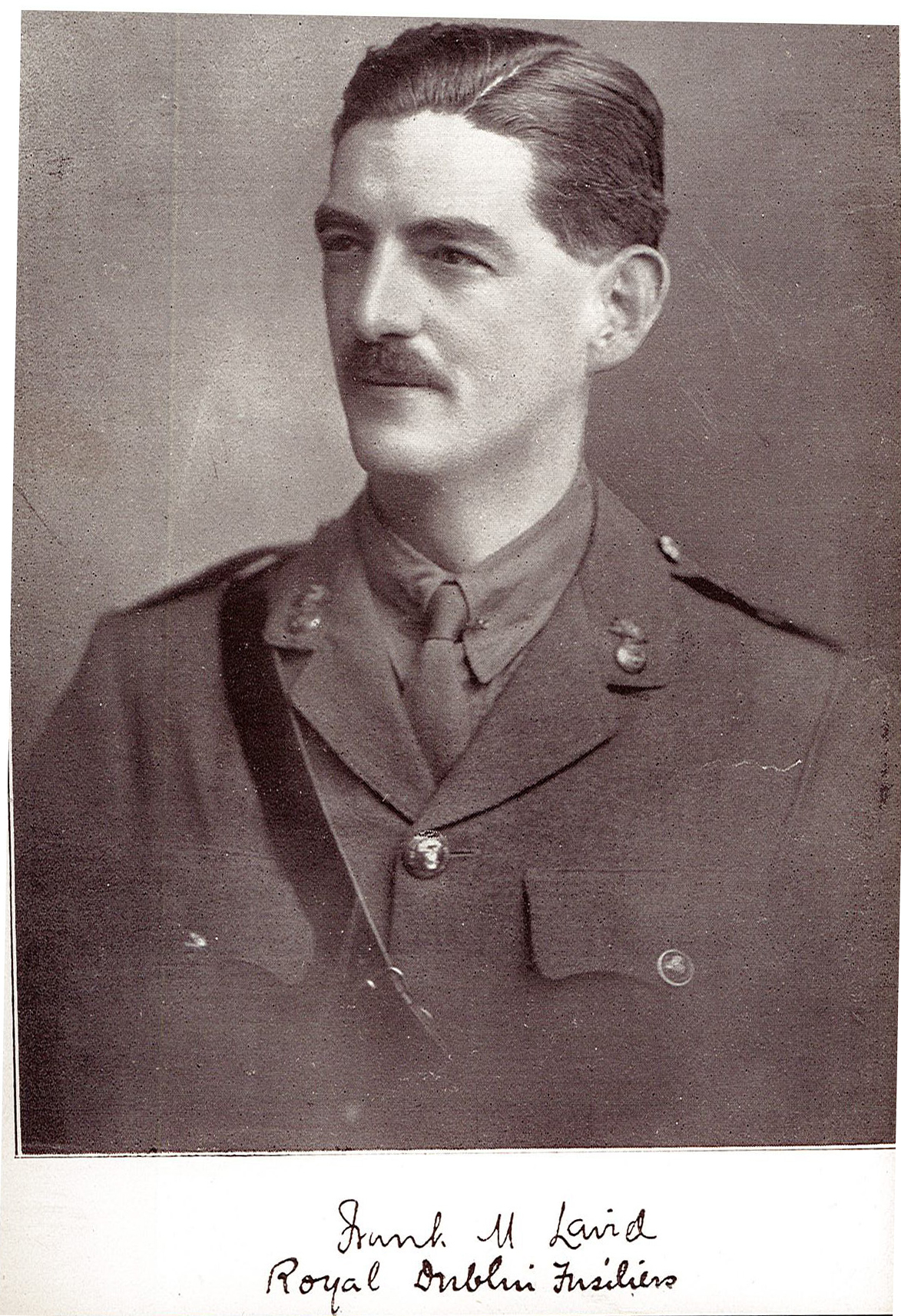 Personal Experiences of the Great War (An Unfinished Manuscript) by Frank M.Laird, Late Royal Dublin Fusiliers was published posthumously by his family shortly after his death in 1925. Laird opens this first-hand experience of the Great War with the following paragraph ‘In July 1914, I was peaceably camping with some friends on Howth Summit. No suspicion had crossed my mind that these were the last days of the old order of things, that the avalanche of the Great War, which was soon to sweep me to far off shores amid strange and terrible scenes, had already begun to move.’ Laird described himself as ‘naturally a man of peace’ but struggled with how he would be seen in the eyes of his friends upon their return from the War if he had not joined up. Working as a Civil Servant in Dublin at the age of thirty-five did not offer much excitement so he also saw joining up as ‘a chance to get out of the groove with a vengeance’. With the support of his sister with whom he was living Laird joined the Royal Dublin Fusiliers ‘It will always be one of the proudest recollections of my life that I had the honour to be made one of their Company’. Laird was wounded at Ypres in August 1917 but returned to the Front in January 1918 only to be captured by the Germans and later released. As a result of his service Laird developed a fatal illness and died on January 6 1925. Laird wrote chapters twenty-five to thirty-four to be given as a lecture. The preceding chapters were written as his own personal memoir of the Great War with no view to publication. Laird eloquently describes some of the most horrific events of the Great War including Suvla Bay, life in front line trenches and the Messines offensive as well as his time in Dublin during the Easter Rising 1916. There are also chapters concerning his experiences as a P.O.W in the Schweidnitz prison camp. This rare publication is excellently written and provides a powerful insight into one Irishman’s experience out of the thousands of Irishmen who fought in the Great War.

Own Book Review: A remarkable Irish memoir of the First World War; As the son of a Clergyman and Dublin Civil Servant, Frank Morrow Laird had a remarkably varied service in the first world war, initially as a recruit in his mid 30s who enlisted in the famous 'Pals' D company of the 7th Royal Dublin Fusiliers and took part in the August 1915 Suvla Bay landings at Gallipoli where he was wounded.

After recovery, he served back home at the regimental depot in Naas before transfer to the 10th RDF stationed in Dublin, with whom he saw action for the suppression of the Easter Rising in April 1916. Subsequently, he underwent officer training with the cadet corps in Fermoy before being commissioned in the 11th RDF late 1917.

He was then assigned to the 8th RDF on the Western Front and served at the Battle of Messines in June 1917. Laird was subsequently wounded in early August 1917 and returned to the front early in 1918 to the now amalgamated 8th/9th RDF which was disbanded in February with excess personnel sent to the 20th Entrenching Battalion. It was while serving with this scratch unit in the German March 1918 offensive, that Laird was wounded and captured. His account deals with his captivity and release after the Armistice. As he actually wrote this part first, and subsequently started on 1914-1917, a break occurs in the chronology of his account July-February 1917 which was uncompleted due to his untimely death in 1925. FM Morrow is buried in Mt Jerome Cemetery, Dublin.

Lives of Illustrious and Distinguished Irishmen, Vol III Part I, 1840