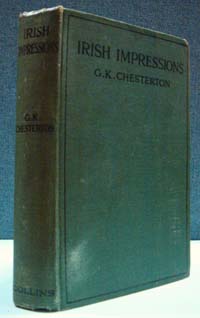 Originally published in London in 1919 by Collins & Sons and the first edition of G. K. Chesterton's Irish Impressions is republished here in fully-searchable electronic format. Born in Campden Hill, Kensington in 1874, Chesterton was educated at St. Paul's School, Slade School of Art and University College, London, but failed to complete a degree at either college. He begun work with the London publishers Redway Fisher Unwin, before taking up his first journalistic work as a freelance art and literary critic. In 1902 he was given a weekly column with the Daily News and in 1905 with The Illustrated London News, for which he continued to write until his death. A novelist - his best remembered are perhaps The Man who Would be Thursday and the Father Brown detective stories - debater, wit and commentator, Chesterton was fascinated in his early life the occult, but in later life drifted towards orthodox Christianity. This culminated in his conversion to Roman Catholicism in 1922 an event that took place shortly after his visit to Ireland in 1918 and publication of Irish Impressions the following year. Chesterton's visit to Ireland in early 1918 resulted in this unique, readable, and thought-provoking book on Ireland. Written at a defining moment in Irish history, Irish Impressions looks at the 'Irish Question' not from a political stance, but from an ideological, philosophical and religious standpoint. Irish Impressions exhibits many familiar Chestertonian themes such as distribution of property, industrialism, faith and society all of which are discussed under the backdrop of Ireland's struggle for cultural and political nationalism. Chesterton, never one to mince his words, was both a Roman Catholic and a lover of English nationalism, who shared many of the sentiments of Irish nationalists. Chesterton's own sometimes contradictory beliefs and views pervade Irish Impressions; these contradictions always lie at the centre of Chesterton's works and this detour into Ireland is no exception and one could walk away after reading Irish Impressions that both the English and the Irish were right and wrong, both positions had their strengths and their weaknesses and in a sense this was the beauty of much of Chesterton's works: they ask more questions of reader than they provide answers. A short book, these themes are readily identifiable in the chapter headings of Irish Impressions, which include the Root of Reality, the Family Feud, the Mistake of England and the Mistake of Ireland. For a brilliant analysis and understanding of Ireland and the cusp of breaking her political ties with England, there is no better read than G. K. Chesterton's Irish Impressions.