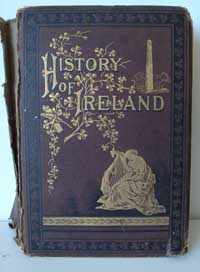 Republished here in fully-searchable electronic format is the 1850 edition of Sylvester O'Halloran's History of Ireland together with a continuation of O'Halloran's History by William Dolby and associated writers then resident in the United States. Published in Providence Rhode Island by Murphy & McCarthy in about 1850 this publication contains Sylvester O'Halloran's History of Ireland from the earliest times to 1171 and is continued by with Dolby's History of Ireland from the Invasion of Henry the Second to the present, compiled from the most approved writers on the subject by W[illia]m. Dolby, aided by a committee of Admirers of Irish History. In all this publication contains 860 printed pages together with a number of copper-plate illustrations of notable Irish personalities such as Wolfe Tone and Daniel O'Connell. O'Halloran's History of Ireland was first published in Ireland in 1774 and his preface to William Dolby's publication is dated Limerick 12th January 1778. One of Limerick's most famous sons, O'Halloran was born at Caherdavin, Co. Limerick, the third son of Michael, a prosperous Catholic farmer. He was taught at an early age by his mother's cousin, the Gaelic poet and scholar Séan Claragh McDonnell and unusually during the Penal Era attended a school run by a Protestant clergyman. However, to further his education O'Halloran first went to London and then Leyden and Paris to continue his education where he studied under the anatomist and academician, Antoine Ferrin. Returning to Limerick in 1749 O'Halloran successfully practised ophthalmic surgery in Limerick until his death in 1807 establishing the Limerick Infirmary in 1760 and becoming a member and latterly a fellow of the Royal College of Surgeons of Ireland and Royal Irish Academy. Despite his success as a surgeon it is as an historian and defender of Gaelic Ireland that O'Halloran's name has been preserved for posterity. O'Halloran's interest in the arts began with his collection of Gaelic poetry manuscripts and this led to an interest in Irish history. From the early 1760s he became embroiled in a heated dispute over the validity and importance of pre-Norman Irish History, which many of the contemporary chroniclers had dismissed as a period of barbarism. Beginning with a public plea in 1763 to preserve the Irish Annals and a refutation of MacPherson's Ossian; Insula Sacra (1770) he went on to publish An introduction to the study of the Antiquities of Ireland (1770). In response to Thomas Leland's conservative History of Ireland (1773) he published his Ierne Defended (1774), which asserted the value of Irish manuscripts and continued his defence of pre-Norman Irish civilization with his A General History of Ireland (1774/5), which forms the first half of this publication. Criticised in his own lifetime for being too sympathetic towards Gaelic Ireland, O'Halloran was immortalised shortly after his death (1807) in Maria Edgeworth's The Absentee, as the character of Count O'Halloran the 'tall thin doctor in his quaint French dress with his goldheaded cane, beautiful Parisian wig and cocked hat'. Republished here on fully-searchable CD-Rom, O'Halloran's History of Ireland down to 1171 coupled with William Dolby's History of Ireland from Henry II to the end of the 1840s is a monumental defence of Irish history and culture and one that should not be missed by anyone interested in Irish history and historiography, the first part of which rightly takes it place as one of the first refutations of Anglo-centric view of Ireland.

Ulster Journal of Archaeology Volume I, 1894