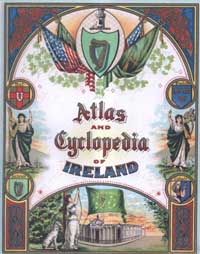 First published in 1905 in New York by Murphy and McCarthy and republished here in fully-searchable format is the Atlas and Cyclopedia of Ireland. A monumental publication, the Atlas and Cyclopedia of Ireland is divided into two distinct parts and as a whole contains more than seven hundred printed pages with many hundreds of maps, photographs and illustrations for all thirty-two counties of Ireland as well as a republication of A. M. Sullivan's Story of Ireland, continued past its original ending in 1867 through to 1900. Part I of the Atlas and Cyclopedia of Ireland has the wordy title: A Comprehensive Delineation of the Thirty-two Counties, with a Beautifully Colored Map of Each, arranged Alphabetically, showing over 11,000 Cities, Towns, Villages, and Places of Public Interest. Embracing over Two Hundred Illustrations of the Natural Scenery, Public Buildings, Abbeys, Round Towers and other Romantic Places, reproduced by Eminent Artists from Photographs especially taken for this Work. Part I is written by the eminent Irish historian and antiquary Patrick Weston Joyce (1827-1914), whose most enduring work was his pioneering The Origin and History of Irish Names and Places. Part I begins with the with the coats of arms of most of the leading Irish families, their mottoes as well as coloured plates of their coats of arms. However, the majority of Part I is taken-up with the topographical atlas of Ireland. Arranged alphabetically by county, each county is introduced with a coloured map and is followed by an account of the origin of t he county's name, its size and population as well as descriptions of its main geographical features, such as rivers, mountains, coastline, etc. Also included are brief descriptions of the main towns and cities contained within each county. However, the dominant feature of Part I of the Atlas and Cyclopedia of Ireland are the illustrations and the first part of the this publication contains some 200 black and white photographs of some of the best and most renowned areas of natural beauty in Ireland as well as many castles, houses and civic buildings that are perhaps not so well known. Part I of the Atlas and Cyclopedia of Ireland is divided from Part II by a comprehensive index of place names that occur throughout and by photographs of the all the incumbent Roman Catholic Bishops of Ireland at the time of the book's initial publication in 1900. Part II of the Atlas and Cyclopedia of Ireland is entitled The General History of Ireland as Told by A. M. Sullivan. This is in fact a republication of Alexander Martin Sullivan's (1830-1884) The Story of Ireland. An Irish politician, journalist and journalist, his intentions for writing and publishing The Story of Ireland were made manifest in his author's note to the first edition. In this he states that 'this little book is written for young people' 'who deserve more attention than has hitherto been paid them by our Irish book writers' and it was to them and 'the Irish nation of the future' that The Story of Ireland was dedicated. Sullivan does his 'little book' a disservice; packed with fascinating narrative accounts of the major political events in Irish history, from the the then earliest known periods of Irish history down to the failed Rising of 1867, Sullivan's style is both both personal and informative, which make for both an interesting and easy read. Containing eighty-eight chapters of narrative on such events as the arrival of the Danes, the Battle of Clontarf and the death of Brian Boru, the establishment of the Anglo-Normans in Ireland, the Rebellion of Silken Thomas, the Reformation, King James and King William in Ireland, the Battle of the Boyne, the Irish in Exile, 1798, the Union, the Rise of O'Connell, the Famine and 1867 are to name just a few. Sullivan's original publication is continued by P. D Numan to include the events of the Fenian Rising, the Home Rule Campaign, the Land War and the United Irish League. Included in Part II are are reproductions of a number of memorable portraits of the likes of John Mitchel, Daniel O'Connell, Robert Emmet and Wolfe Tone to name but the a few. Taken as a single publication, Atlas and Cyclopedia of Ireland is a very desirable and collectable publication and is an excellent acquisition for the illustrations alone.