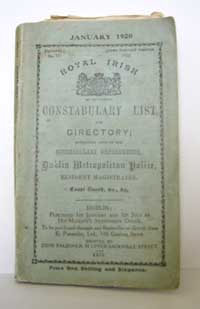 Originally printed and published in Dublin by John Falconer of Upper Sackville Street and republished here in fully-searchable format, is the Royal Irish Constabulary List & Directory; Containing Lists of the Constabulary Departments, Dublin Metropolitan Police, Resident Magistrates, Coast Guards, Etc. Appearing bi-annually on 31st January and 31st July, this issue is numbered 157 and was published in January 1920 and contains 290 printed pages. This issue is especially poignant, issued during the War of Independence the Royal Irish Constabulary had less than two years left in existence and the officers and men of the RIC were employed in one of the most dangerous occupations in the world, illustrated by the published list of deceased officers in the previous six months. This fact was perhaps reflected in their rates of pay. With men leaving the service in their droves the starting salary for a constable with less than six months service had risen from £39 a year in 1889 to £80 in January 1920. The etcetera component to the RIC Constabulary List & Directory is contained in the main of advertisements and also a miscellany of information to the general reader contained in the directory's introductory pages, some of which is extremely useful and some quite strange. For example, we are informed that in the year ending 31st March 1920 general income tax was at the rate of six shillings in the pound - it had been one shilling and three pence in the pound, only five years earlier - and the average letter cost one old penny. The introductory section also includes lists of cabinet and non-cabinet misters in Her Majesty's Government. The RIC Constabulary List & Directory proper begins with a seniority list of the RIC from its then Inspector General, Brigadier-general Sir Joseph A. Byrne down. From the rank of County Inspector down the RIC Constabulary List & Directory provides by date of appointment the name of officers, the date of appointment, whether or not they had been awarded good service pay and/or been awarded medals as well as any university or professional qualifications gained. This is followed by alphabetical lists of county and district inspectors together with the dates of their appointments from 3rd through to 1st class. Further lists for this group of RIC officers include the counties, stations and post towns in which they were currently posted, alphabetical lists of RIC Stations, promotions and transfers as well as biographical returns for the half year for officers who had received commendations and the reasons this commendations and citations were given. The list for county and district inspectors is followed by lists for head constables and sergeants - the RIC Constabulary List & Directory does not include details on members of the RIC and Dublin Metropolitan Police below these ranks - which includes alphabetical lists together with RIC Service numbers and the stations and post towns to which these officers were attached. Part 1 of the RIC Constabulary List & Directory is concluded with the publication of promotions in the half year and a listing of all of the RIC Stations in the country together with the district the station served and the name of the Sergeants in Charge. Part 2 of the RIC Constabulary List & Directory for January 1920 begins with an alphabetical list of resident magistrates, divisional and county clerks, county coroners, county court judges, chairmen of the various Quarter Sessions as well as the names of Clerks of the Peace, Part 3 treats on members of the Dublin Metropolitan Police, the divisions of the force in the City Dublin with the names of the sergeant in charge of each station; this section is concluded with lists of officers in the pay of the Coast Guard Service and lists of Hut Stations and Protection Posts throughout Ireland. RIC Constabulary List & Directory for January 1920 is concluded with some seventy or so pages of advertisements, presumably aimed at the officers and men of the Royal Irish Constabulary. The majority of these advertisements are for watches and other time pieces, bicycles and jewellery. The RIC Constabulary List & Directory for January 1920 is the complete list and guide to the Royal Irish Constabulary, Dublin Metropolitan Police and other civil authorities in Ireland for the half-year for which it was issued.