The Post Office Annual Directory and Calendar for 1843, Dublin. 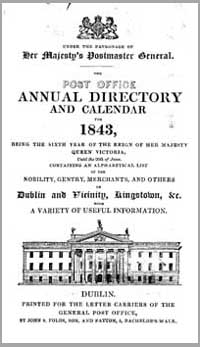 Published from 1832 (or earlier) was the exceptionally rare Post Office Annual Directory and Calendar for Dublin city. It was published annually by John S. Folds, and should not be confused with either Pettigrew and Oulton's Dublin Directory, or the better known Thom's Directory. This volume is the edition for 1843, containing some 650 printed pages, the full title of the original publication read as follows: The Post Office and Annual Directory Calendar for 1843, being the Sixth Year of the Reign of Her Majesty Queen Victoria, until the 20th June, Containing an Alphabetical List of the Nobility, Gentry, Merchants & Others in Dublin and the Vicinity, Kingstown, Etc., with a Variety of Useful Information. This edition was published the year before the first edition of Thom's Dublin Almanac and Directory, and the Dublin Post Office Directory and Calendar did not survive the competition. However, for the year in which this edition was issued, it is the most complete directory available for Dublin and as such is a much- prized acquisition for genealogists and family historians. The useful information intimated in the title of this publication includes as one might expect various calendars for the year 1843; postage and carrier rates from Dublin to the rest of the country; interest tables and many advertisements, predominantly for life assurance companies. The publication also includes complete listings for all of the military, civil and religious establishments of Dublin City and County. These include the police, schools, hospitals, churches, landed gentry and the peerage of Ireland, which relatively speaking takes-up only a small proportion of this issue, some 130 pages. The Post Office Directory proper is prefaced by an alphabetical list of the streets, lanes, etc., in Dublin and its immediate vicinity, followed by a list of the public buildings, banks and offices in the city. Although the Post Office Directory and Calendar does not include a streets directory for the capital and its suburbs, some three-hundred pages are given over to the alphabetical listings of the nobility, gentry, merchants and traders of Dublin, which compares extremely favourably with later editions of Thom's Dublin Almanac and Directory. There follows separate directories for the professions such as the legal profession, including barristers, attorneys, benchers of the King's Inns, medical practitioners, surgeons and apothecaries, and so on. As one might expect from a Post Office Directory, the latter portion of this issue, some 100 pages, is taken-up with the General Post Office Directory. This consists of lists of the post towns of Ireland and post throughout Europe as well as the rates of carriage to these destinations. Of some particular interest is the Mail and Stage Coaches from Dublin. This provides the details from where all the stage coaches departed from in Dublin to destinations all over the country, times of departure and arrival as well as the intermediate stops on the coach's journey en route to its final destination. As this is one of the earliest directories for Dublin that includes alphabetical listings for nobility, gentry, merchants and traders, this is a valuable acquisition for all family historians and genealogists.

Journal of the Association for the Preservation of the Memorials of the Dead. Volume XI, for the years 1921-1925. Index to the Parish Register Section. 1926