Samuel Smiles L.L.D., The Huguenots, their settlements, churches and industries in England and Ireland. 1889 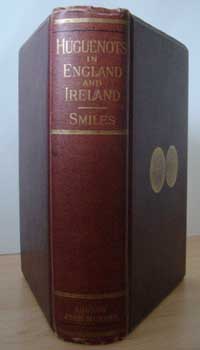 First published in London by John Murray in 1889 and republished here in fully-searchable format is the 6th edition of Samuel Smiles The Huguenots their Settlements, Churches, and Industries, in England and Ireland. Containing more than 500 printed pages The Huguenots traces the history the movement from Martin Luther and the Reformation, the founding fathers of the movement and the early persecutions of the reformed through to the diaspora from continental Europe to England and Ireland and the consequences of the French Revolution. Written by Samuel Smiles (1812-1904), a Scottish author and himself and active reformer, Smiles is perhaps best-remembered now for his incredibly popular self-help manuals such as Self-Help, Character, Thrift, Duty, Life and Labour, published between 1859 and 1887 and his Lives of Engineers. After suffering a stroke in 1871 Smiles re-taught himself to read and write and devoted the remainder of his long life to writing numerous works on self-improvement. This brought him into conflict with his more-socialist acquaintances and colleagues from his younger years, such as leading members of the Chartist Movement. The Huguenots fits well into Smiles general ideas of social tolerance and the catastrophe that can result when personal and civil liberties are not observed. First published in 1868 prior to his stroke, this, the sixth edition, includes a new preface by Smiles and a number of important appendices and additions not present in the earlier editions of the work. The main body of the text of The Huguenots is encompassed in nineteen-chapters. The first five trace the history of the reformers from the Reformation, the St. Bartholomew's Day Massacre and the death of Mary Queen of Scots and the beginning of the first phase of Huguenot migration. There follows chapters on these earlier settlers in England, the establishment of their churches, the Edict of Nantes and renewed persecution under Louis XIV, which resulted in the massive diaspora of the Huguenots from Europe to England and Ireland in the late 1600s, their fundamental role in the English 'Revolution' of 1688 and service in the war in Ireland that followed shortly after. A further two chapters are given over to Huguenot men of learning, science and industry in England, before Smiles details the Huguenot settlement of Ireland concluding with interesting accounts on the descendants of the early refugees and the impact wrought by the French Revolution. This sixth edition also two biographical lists of distinguished Huguenot and their descendants both in England and Ireland and the original is fully-indexed. Samuel Smiles' The Huguenots their Settlements, Churches, and Industries, in England and Ireland presents a very readable account of the birth of Protestant reform in Europe from the Reformation and Martin Luther through the two waves of mass-migration culminating in the French Revolution. Accompanied by very valuable biographical notices on many leading Huguenot families and their descendants in England and Ireland, this republication is a must for anyone interested in this turbulent and fascinating aspect of European history.