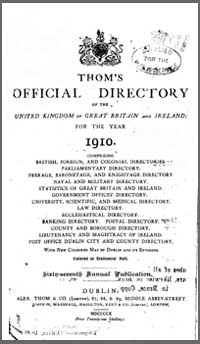 First published in 1843 by Alexander Thom & Co., Thom's Irish Almanac & Directory, is still being published and is rightly seen as the pre-eminent directory and almanac for Ireland. When it was first issued in 1843 Thom's contained some 1,000 printed pages; by the time of this 1910 issue the Directory contained nearly 2,500 printed pages, which are released here in fully-searchable format. The development of and deviations of the title of Thom's publication was in many respects driven by the changes and additions to its contents. Although primarily and rightly seen as an Irish directory and almanac, more than 600 of this edition's initial pages are given over to a multitude of separate directories pertaining to the United Kingdom and its dominions and the breadth of these multifarious directories are given on this editions title page, which reads as follows: Thom's Official Directory of the United Kingdom of Great Britain and Ireland for the Year 1910. Comprising British, Foreign and Colonial Directories. Parliamentary Directory. Peerage, Baronetage, and Knightage Directory. Naval and Military Directory. Statistics of Great Britain and Ireland. Government Offices' Directory. University, Scientific and Medical Directory. Law Directory. Ecclesiastical Directory. Banking Directory. Postal Directory. County and Borough Directory. Lieutenancy and Magistracy of Ireland. Post Office Dublin City and County Directory. In essence, this edition records the details of all the functionaries of state and government, military, civil and religious, from the Queen down to the clerks in the stationary office. More than two-thirds of this edition of Thom's Official Directory are given over to Ireland. Beginning with statistics for the country as a whole taken from the 1901 Census of Ireland, the Official Directory also provides county-by-county details on Irish landowners of 1,000 acres and upwards and 10,000 acres and upwards, with a further 300 pages or so detailing the multitude of state functionaries, civil, religious, financial and military. This includes all the incumbents of the various parishes and benefices in Ireland, all army and navy officers, barrister and solicitors, doctors and physicians, all educational and medical institutions and members of their governing bodies and even the clubs and private institutions, such as learned and academic societies and members of their respective councils. The County Directory of Ireland provides statistical information on each county derived from the 1841, 1851, 1861, 1871, 1881, 1891 and 1901 Censuses of Ireland as well as the names of all the civil functionaries of the counties ranging from the deputy lieutenant down to local magistrates, the places and dates of county fairs, poor law unions, petty sessions and polling stations and this section is complete by the Borough Directory, which provides similar information for the municipal Boroughs and Towns of Ireland. Almost 1,000 pages of the 1910 edition of Thom's Official Directory is given over to Dublin County the City and its suburbs and as one would expect the level of detail provided in these sections far exceeds the that given for the rest of Ireland. For the capital itself a comprehensive street directory is provided, which extends to the various townships and suburbs of the city such as Rathmines, Pembroke and Kingstown as well as the residents of many of the larger villages, which at this time had not been incorporated into the city. In addition, Thom's provides a list of the Dublin City and county nobility, gentry, merchants and traders as well as a trades directory and it is to the street and trades directories that most people are drawn to in search of their Dublin ancestors. This edition is concluded with the Annals of Dublin, recording important events in the history of the city from the year 140 AD until November 1909 and some seventy pages of advertisements. Republished here in fully-searchable format, at least one edition of Thom's Directory and Almanac is a must for every Irish household.