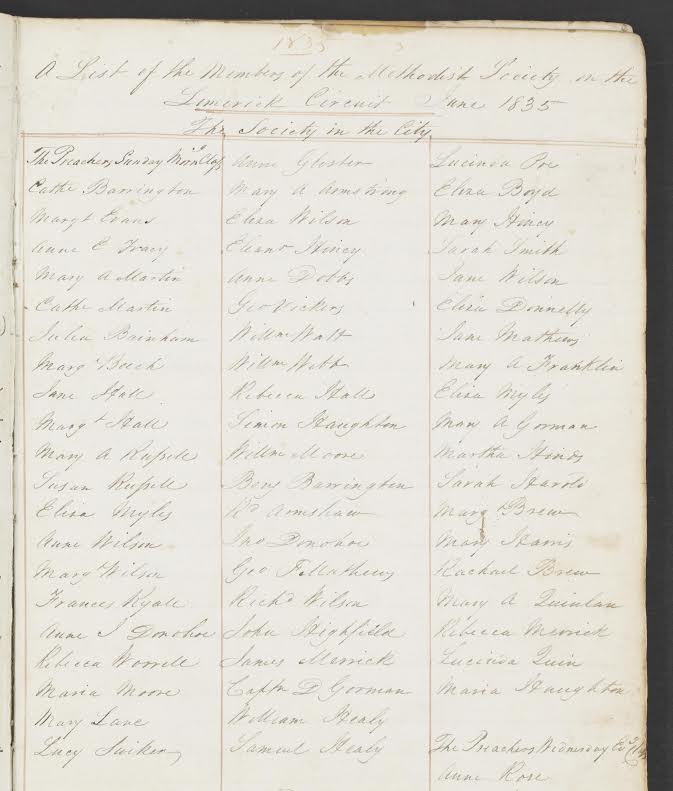 For the first time the historic parish registers held by Christ Church Limerick are being made available online. They contain the names of thousands of people who were members of the Presbyterian and Methodist congregations of Limerick city as well as Kilrush in County Clare and Killarney in County Kerry. Dating from 1813 they document the lives of these non-conformist communities, with details of baptisms, marriages and church attendance. The lengthy and detailed Subscribers lists (Methodist) and Communicants Rolls (Presbyterian) give a snap shot of the community at several dates from 1835 onwards and include details of emigration and occupation. The records are a window into an important part of the Munster community that tends to be over looked because of their smaller numbers.

While never numerically large, in the past there were many more “dissenters”, as they were known, than today. These were people who professed a different protestant Christian faith to the Established church (Church of Ireland). In 1861 they made up nearly 2% of the population of Limerick city. Christ church was established in 1813 to service the Methodists on Limerick city, and 40 years ago they united with the city’s Presbyterian congregation. As a consequence Christ Church houses the records of both denominations. But they have also collected more, including the Methodist mission in Kilrush, Co. Clare (1847 to 1901) and the Presbyterian congregation in Killarney, Co. Kerry (1879-1907).

The project to digitise and publish the records was initiated by John King, CEO of the Irish Ancestry Research Centre (IARC), working in partnership with Eneclann and Findmypast. Eneclann digitally imaged all the records at high resolution preservation standard. This work was done for free and donated to Christ Church so they could retain ownership of their own records, both original and virtual.Findmypast transcribed all the records and, with the images, published them online for all researchers to use.

It is hoped that more churches and denominations see this exercise as an example of how they can facilitate access to their historic records as well as undertaking the important task of creating high quality copies, working in partnership with IARC, Eneclann and Findmypast.

I am looking for information about my Great Grandmother, Johanna DANNAHER/DONNAHER born Jul 1832 in Limerick. Her family came to the USA in 1848 or 1851. Family stories say she married a QUINN but it quickly ended.

Dear John, For your ancestor born in 1832 you will need to consult parish records
As each religion archived their own records, you will need to know what religion Johanna Danagher was likely baptised in to.
There is no one central place for Anglican or Presbyterian records.
Catholic parish registers, are on either ancestry .com or findmypast.ie
Carmel Gilbride