As a younger son Patrick Russell Cruise had not inherited the family ancestral seat of Drynam House.  However, he had inherited a half share in approximately 500 acres of land, comprising the townlands of Paristown and Dardistown, in the Barony of Delvin in county Westmeath.[1]   These lands had been set out to tenants by Patrick Russell Cruise’s maternal grandfather in September 1782 for a term of sixty-one years, due to expire in May 1843.  Between ca. 1825 and May 1843, the revenues from these lands were sent to Patrick Russell Cruise in New York, by a Dublin based solicitor and land-agent John Smith.[2]

Right: courtesy of the Registry of Deeds

Even before the expiry of his tenants’ lease in May 1843, relations were strained between Patrick Russell Cruise in New York and John Smith in Dublin.  Patrick had promised the sitting tenants that on the expiry of the lease, he would ensure they had a preference “because he felt he was bound in honour and conscience to look to the tenants in possession.”  The lawyer Smith wanted to remove the sitting-tenants on expiry, and to lease the lands to the highest bidder.  Smith appears to have felt very constrained by Russell-Cruise’s instructions, and on his own volition 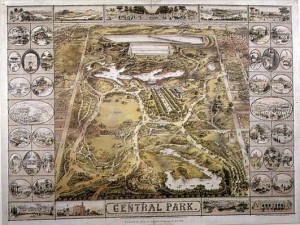 he evicted the tenants, and wrote repeatedly to his client in America to request power of attorney over the lands.  Patrick Russell Cruise refused to hand over power of attorney for the  Irish lands, but one of his letters to Smith written in September 1843 reveals his own homesickness for Ireland at this time, and his intention to return: Patrick Russell Cruise wrote “I do not look forward to my remaining much longer in America; asï¿½ soon as some of my sons are fit to push forward and do for themselves I shall return, and should therefore prefer locating on my own soil than elsewhere.”[3]