St. James Gate Brewery - A Glimpse into the Past

Alfred Barnard was the author of a four-volume work entitled Noted Breweries of Great Britain and Ireland, (1889-91).  He conducted his research by visiting each of the breweries  and seeing at first hand how work was carried out. Barnard was particularly excited to start his tour of breweries with Guinness’s which he describes as ‘the largest and most renowned brewery in Europe’.  Over a period of ten days he ‘witnessed on a grand scale, the manipulation of malt, and its manufacture into porter’.

Seven chapters of Barnard’s work are devoted to the Guinness Brewery, suggesting its importance in the worldwide brewing industry. Indeed, writing in 1889, Barnard commented that ‘the business is now the largest in the world, and the buildings in which it is carried on cover nearly forty-two acres of ground.’  At the time of Barnard’s visit to the brewery, Claude Guinness was the Managing Director.

The overwhelming picture is one of a company that had been an international player since 1825, was at the cutting edge of the brewing industry and employed a vast number of staff.  According to Barnard, ‘The average number of hands employed in the establishment, which besides labourers, artisans, brewers, maltmen and engineers, includes clerks and managers of departments, is 2,650 persons, representing the working inhabitants of a town with a population of upwards of 6,000.’ Therefore a huge percentage of the Dublin population was employed at the brewery.

We get an impression of the dominance of the brewery and its activity, not only in the surrounding area but internationally as Barnard describes his journey to St. James’ Gate. ‘As we drive along,’ he writes, ‘we pass scores of carts laden with malt, hops and barley, and the air is redolent with their odour. Although some other trades have declined, those of brewers, distillers and maltsters still hold their places amongst the manufacturing industries of Dublin, the two former having obtained remarkable impetus of late years. The porter and whisky made in Dublin are of high repute, not only in their native country, but in England and the Colonies…’

The team at Guinness’s demonstrated a paternalistic approach towards its employees, something which is still remembered to this day. Barnard describes Belview and Rialto, two villages that were erected by Messrs. Guinness & Co. for their workmen. The populations were ‘upwards of 350 persons’ and ‘upwards of 400 persons’ respectively. The standard of living in these villages was very good for the time.

For instance Barnard remarks that, ‘The drainage and sanitary arrangements are perfect. Both colonies possess a dispensary and resident medical attendant paid by the company…There is a capital recreation ground…a most flourishing co-operative store.’

Likewise, the families of the Guinness workers tended to be well looked after. ‘We were informed that all sorts of benefit and building clubs are well supported by the men, and that good provision is also made for them by the company in case of sickness, and to the widows after their husbands’ death’. Being a worker at the Guinness Brewery was considered to be an honour.

Barnard’s account of his tour of the brewery explains in some detail the various processes involved in making the stout, and the machinery used in these processes. He is clearly impressed with some of the cutting-edge processes and equipment used. However, the magnitude of the operation which he describes as ‘without doubt the largest establishment of its kind in the world’ renders him initially ‘bewildered by the dimensions of the buildings, the size of the vessels, and the disposition of the ponderous machinery…’

Two types of porter were created in the brewery: plain porter (single stout) which Barnard equated to London porter, and double stout which in England was known as bottled stout. The raw materials used water included water, barley, hops and yeast. The water used to make the stout was the moderately hard water from the Grand Canal. (The softer water from Dublin’s other water supply, the river Vartry, was better suited for boilers and other processes). While some of the barley used in the brewing process was from Ireland, Guinness’s also imported barley from England, Scotland and elsewhere.  The majority of hops were sourced from Kent in England but some were also imported from Germany and America.

Barnard explains in some depth the various processes and machinery used. He was particularly impressed with Guinness’s narrow-gauge railway system, commenced in 1873 and completed in 1877.  Barley was delivered by train to the malt-houses where malting would be carried out between the months of September and May. Once the barley had been steeped, floored and kiln dried, the resulting malt would be emptied into the railway’s malt wagons and transported to the malt stores at St. James’ Gate. When required by the mills, the malt transported from the stores to the mills by rail, as were the finished product – the casks of stout – which were delivered to Victoria Quay where they would be offloaded onto barges. Empty casks were also offloaded from barges by crane and loaded onto the railway wagons. 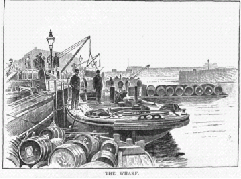 The Guinness barges were a familiar sight and were crucial to the overseas business of the brewery. Barnard observed that ‘when as many as nine barges are ready, and the tide is favourable, off starts the little fleet and steams down the river to the cross-channel steamers.’

In all, Barnard devotes over forty pages to his description of the Guinness Brewery as it was in 1889, which is of interest to anyone researching the history of the St. James’ Gate Brewery, brewing in general or anyone who may have had a family member working there. There are also a number of black and white illustrations (some of which have been included in this article) which complement his descriptions.

If you’d like to find out more about Barnard’s Noted Breweries of Great Britain and Ireland, (1889-91) a detailed description can be found at our online shop, where it is for sale on fully searchable CD-rom.