1916 Galway and The Battle of the Somme at Loughrea Hotel. 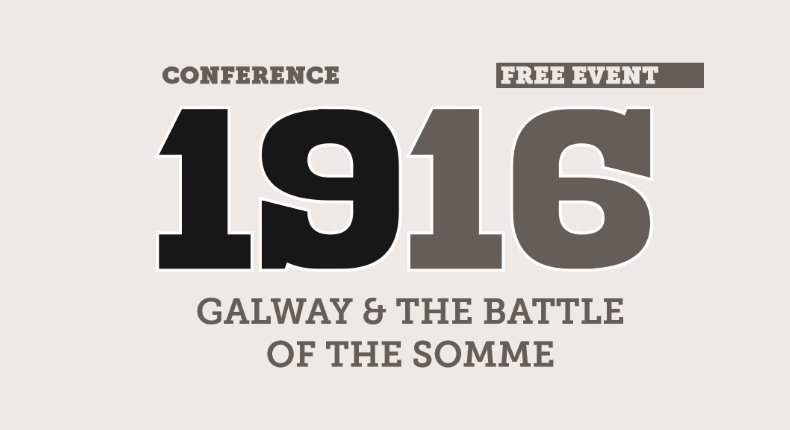 10.15 am – 11.00am “From Galway to Frongoch: Galway Volunteers’ experience of rebellion, imprisonment and exile” by Conor McNamara

3.15pm – 4.00pm “The 6th Battalion Connaught Rangers and their involvement in the Somme September 1916” by Joe Loughnane

Dr Conor McNamara is based in the Moore Institute, NUI Galway and teaches the history of the Irish revolution. Conor’s research focuses on political violence and social upheaval in nineteenth and twentieth century Ireland. He has written extensively on food shortage in the West of Ireland in the first half of the nineteenth century, social upheaval during the revolutionary period, and the intersection between political violence and banditry. He is the author of the best selling study, The Easter Rebellion 1916, A New Illustrated History.

Mr Gregory O’Connor has worked as an Archivist at the National Archives of Ireland since 1989. He has had responsibilities in the areas of accessioning, arranging and describing legal records taken in from court offices, solicitor’s (attorney’s) offices and from private individuals. In recent times as a member of Reader Services Division his primary role is to deal with queries from Readers, Correspondents and Telephone callers. Gregory is extremely knowledgeable on all aspects of genealogy and local history sources. He has lectured extensively both in Ireland and abroad

Joyce Elena Ní Ghiobúin is a graduate of Reconciliation Studies (MPhil, TCD Belfast), and has recently completed an Advanced Diploma in Local History (Oxford), towards continued research on transnational aspects of nursing history in Ireland. Her interests include district and military nursing (18501920), and the discipline of historical biography.

Brian Donovan is the Global Head of Irish Collections at findmypast.com.  He previously lectured in history at Trinity College Dublin in the 1990s and since then has lectured throughout Ireland and the US on history, genealogy and digitisation. Brian’s experience in digital technology, as well as his background in history, helped motivate the founding of the well-known Irish genealogy company Eneclann in 1998. He played a key role in establishing the Irish collection at www.findmypast.com, and launched the exciting new Irish Family History Centre in Dublin in May 2016. Brian oversees all aspects of the development of the Irish record collection at findmypast.com

Joe Loughnane Joe is a member of the Loughrea Memorial Group, and has an MA in military history.  He has an in-depth knowledge of the Connacht Rangers, WW1 and the locals who were involved. Joe presents lectures to various groups on the subject of World War 1 and the 1916 Rising in County Galway. He is a member of GMIT‘s 1916 Steering Group. He was involved in the very successful Farming and Country Life’ event held in Teagasc in June 2016. He is very involved in documenting Galway men who were involved in the Battle of the Somme.

To reserve a place on this free conference please contact one of the following: