Many have heard the name Molly Malone or seen her bronze statue on Grafton Street in Dublin. She represents an old, mysterious story set in Dublin, Ireland, that has firmly cemented itself within the Irish culture.

The legend goes that Molly was a beautiful young girl who worked as a fishmonger until she died suddenly of a fever. After her death, the story says her ghost began haunting the streets of Dublin.

Whether you believe the tale or not, Molly Malone is worth learning about for the fascinating ways she lives on in the culture of Ireland. Continue reading to learn more about this legendary character, from her statue and song to the reasons she remains so well-known among the Irish.

Who is Molly Malone?

Molly Malone is a figure from Irish folklore who became one of the most well-known symbols of Dublin. She is often called the tart with the cart and is said to haunt the streets of Dublin to this day.

While talk of Molly Malone in Ireland has continued through the generations, there is no clear answer as to whether or not she was a real person. However, there are a few theories about who she may have been based on.

One theory suggested that Molly Malone was based on a real woman who died in Dublin in 1699. However, this was never officially confirmed, so the debate continues as to whether Molly’s story is fact or fiction.

What is Molly Malone Famous for?

The stories of Molly Malone in Dublin have gained international fame. However, she is most famously known for the song Sweet Molly Malone. Many refer to this song as “the unofficial anthem of Dublin.” It tells the story of Molly’s life and death and has been adapted and performed by many artists over the years.

Arguably, the Molly Malone song has remained so popular because it captures the spirit of Dublin. It tells the story of a working-class woman who dies young, but lives on indefinitely through lively cultural traditions.

One way the story continues is through Molly Malone day. This is an annual event in Dublin on June 13, honouring Molly and her iconic song. The celebrations include a parade, live music, and street performers. 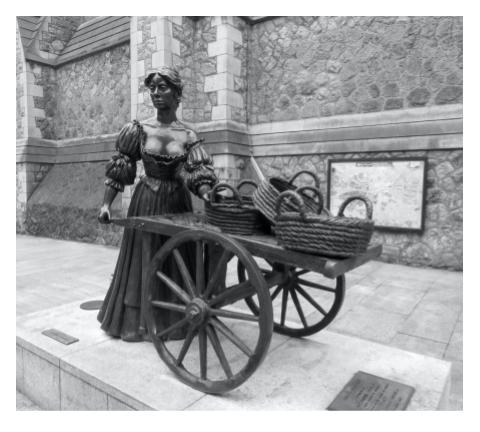 (Photo by Mark Lawson on Unsplash.)

A bronze sculpture of Molly Malone was erected on Grafton Street at the 1988 Dublin Millennium celebrations. The statue, created by artist Jeanne Rynhart, has become one of Dublin’s most popular tourist attractions.

Like the legend, Sweet Molly Malone is a song set in Dublin. While there are several versions of the song, James Yorkston wrote and composed the first published version in 1884. You may also know this Irish song by the names of “In Dublin’s Fair City” or “Cockles and Mussels”.

Here are the lyrics to the most commonly known version of Molly’s song.

Where the girls are so pretty

I first set my eyes on sweet Molly Malone

As she wheel’d her wheelbarrow

She was a fishmonger

But sure ’twas no wonder

For so were her father and mother before

And they each wheel’d their barrow

She died of a fever

And no one could save her

And that was the end of sweet Molly Malone

But her ghost wheels her barrow

Whether you’re near or far, hearing the Sweet Molly Malone song can give you a small taste of the spirit of Dublin. For those with roots in Ireland, there’s something special about hearing her story, seeing her statue, and joining in on crowds of people singing her song.

Nothing makes us happier at the Irish Family History Centre than connecting people to their Irish ancestry. Contact our experts for support with tracing your Irish family tree through the generations.