Rickard Donovan was very clear about his Irish identity, be that within the British Empire, or as an independent state. Among the family papers are his notes on proposals for treaty negotiations with de Valera during WWII, to bring Ireland into the war. In them he shows a remarkable clarity of the issues involved, a dislike of Churchill’s stubbornness, and a respect for de Valera’s position of neutrality.

Although Rickard’s career kept him in England, he maintained strong connections with Ireland and he always considered his home as Ballymore in Co. Wexford. Even at the height of WWII he took every opportunity to come back. His mother and sisters remained in Wexford, and Rickard worked closely with them to maintain the family farm as a viable enterprise, but also to assist his sisters’ other entrepreneurial efforts, including helping re-establish Carley’s pottery in Enniscorthy.

From the 1920s, when the Wynne sisters took over the long-established Avoca Woollen Mills, Rickard’s sisters, Barbara and Phoebe Donovan, used their wider family connections to help their Wynne cousins extend into the English and European markets. In the 1920s and 30s, Avoca tweeds were used in her hey-day by the couturier Elsa Schiaparelli, and in the late 1940s/ early 1950s Elizabeth II, or rather her children’s nurse(s), used baby blankets from the Avoca Mills.

Rickard Donovan died in London in 1952, at the age of 54. His body was brought home to Ireland and he was buried on a hillside overlooking the sea, at the family farm in Ballymore, Co. Wexford.

His personality was widely remarked upon by all who knew him in Ireland, England and Scotland. He was both gracious and courteous and extremely well liked by all who worked with him. To his neighbours in Wexford he was simply known as “the Captain”. 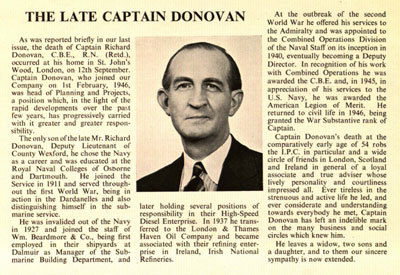 There is still no monument or commemoration to the Combined Operations in the UK. However, on the 28th of April 2009 the trustees of theNational Memorial Arboretum in Staffordshire approved plans for a Combined Operations Memorial within the grove of theAllied Special Forces Association. A date for the unveiling/dedication ceremony has yet to be announced, but it is probable that it will be 6th June 2010, the 66th anniversary of D-Day.

On commemoration day we honour the memory of all the Men and Women of Ireland of past wars.
Watch here as RTE’s Nationwide take’s a look at Rickard Donovan:The Role of a Wexford man on D-Day, 6 June 1944.