Behind the scenes in the Genealogy Advisory Service @NLIreland.

Behind the scenes in the Genealogy Advisory Service @NLIreland

The fun of the genealogy service in the National Library is that we never know in advance who we’ll meet, or what stories we’ll hear.  Our job is to listen, to identify verifiable facts and events, and to guide enquirers in their research.  The search never ends, because family history isn’t just about the past, it allows people to explore personal identity.

Here are some of the stories we’ve heard from recent visitors recently.

First up, a quick line from Laura shows just how much amusement we get from job descriptions that you might not want to put on your CV today:

“A very short line…. Genealogical Advisory Service …..a census in USA….the lady of the house there…….occupation "Stripper" ……… ah well ……. in a shoe factory! 😉 so no scandal there :-)”

Now from the bright lights of the shoe factory to the dramatic story of the lengths one man will go to in order to shirk his responsibilities. Helen tells us this fascinating story from a couple who visited her last week:

David and Carol Cain were on holidays from Australia when they called in to the library last week.  David already knew quite a bit about his ancestor – William Nixon Wright – and had a fascinating story to tell.  William was born in county Monaghan in 1803, the son of the Rev. John and Mary Wright.  William was arrested while still a student at Trinity for having forged a Bill of Exchange for £300.  William pleaded ‘Guilty’ to the offence and the judge in newspaper reports stated ‘he would for the present exercise the power allowed him, of only ordering sentence to Death to be recorded – leaving to a higher power the extension of that mercy which these circumstances might warrant’.  Not only had William forged a money bill but his father stated that he had made a very imprudent marriage according to a letter David still had in his possession.  The father pleaded for clemency and the sentence was commuted to transportation.  William arrived in Australia on board the Governor Ready on 17th January 1829.  His unfortunate wife, Jane, followed William out to Australia.  It is unclear if his children were born in Ireland or Australia, but in 1833 the family was abandoned by William, who escaped on a ship bound for Hawaii!  This was the last the family ever heard of him.

Wouldn’t we love to know how that particular story ended?! Well here is one happy ending that most of us genealogy enthusiasts can only dream of told to us by Kay Caball:

A recent visitor to the NLI Genealogy Advisory Service, Kerry Jones (nee Magee) came to enquire about records for her paternal ancestor John Magee whom she believed was born in Wexford c. 1879.

Up to two years ago she knew absolutely nothing about this side of her family as her parents had separated when she was young and she had lost touch with her father who had moved to another part of Australia. She knew her father had aunts called Sarah Emily Magee in Sydney and Peggy  Magee, in South Australia, both deceased,  and that was about it.

In 2014 having exhausted all possibilities she tried putting in the name ‘Sarah Emily Magee’ into Rootsweb and to her surprise up came the following: 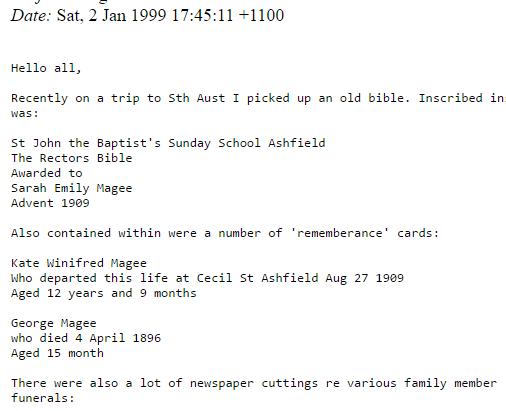 Philip Blackwell had found the Bible and its contents on a visit to South Australia.  He noted ‘If anyone is related or knows of someone who may be related, I would be happy to return these items back into the family fold’.  Philip also helpfully left an email address and a telephone number – but this Rootsweb message was there since 1999 and it was 2014 when Kerry Jones found it.  It took her almost two years to find Philip Blackwell, he had moved to the State of Victoria in the intervening years.  After a lot of detective work she eventually found Philip – he still had the Bible fifteen years later, but it was in storage following his last move.  Kerry could not believe her luck and immediately she got hold of the package and read through its contents, she and her husband planned a visit to Wexford.   She still has no idea of how the Bible travelled from Sydney to South Australia and then back to her.   Maybe another case of synchronicity?”

Well that was certainly a combination of extraordinary luck and fine detective work.  It just goes to show how many surprises might be out there for us if we just know where to look. Our own dusty family Bible was frustratingly left blank. I mentioned it to my mother recently who said “Oh that! I got that in a jumble sale back in the late 1970.” Another mystery solved!

Tune in next time for more fascinating tales and anecdotes from the Genealogical Advisory Service team.

A hearty thanks to our visitors to the Genealogy room @NLIreland, who agreed to share their family stories.