Newspapers are a fascinating, and sometimes vital, source of family information. This blog tells how a newspaper article contained crucial leads about the World War I history of my grandmother’s uncle, William Henry Ryder. 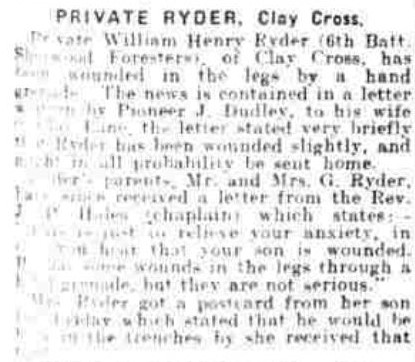 Transcription: Private William Henry Ryder (6th Batt. Sherwood Foresters) of Clay Cross, has been wounded in the legs by a hand grenade. The news is contained in a letter written by Pioneer J. Dudley, to his wife at Clay Lane. The letter stated very briefly Mr. Ryder had been wounded slightly, and might in all probability be sent home.

Ryder’s parents, Mr. and Mrs. G. Ryder have since received a letter from the Rev. J. P [?Hales] (chaplain) which states:-“Just to relieve your anxiety, in […] that your son is wounded. […] wounds in the legs through a hand grenade but they are not serious.”

Mrs. Ryder got a postcard from her son on Friday which stated that he would be back in the trenches by she received that ….

Newspaper articles containing this much information are uncommon, but now I had everything I needed to track down William Ryder. Using Findmypast.ie and William’s regimental details, I could pull up his entire military record.

He enlisted on the 24th May 1913, aged 18, fought in several campaigns and did not die from his inevitable wounds – he went on to serve for over four more years. He was later discharged on the grounds that he was unfit for military service. The doctor’s handwriting was predictably illegible, but the medical note, combined with the army’s records, revealed that William had been discharged in 1917 due to shellshock and epilepsy, after four years of being sent back and forth between England and France. Aged just 22 years old, William had endured a lifetime of deaths, gunfire and hardship, and his disability had been brought on by the horrors of war. I wondered what had happened to William after his turbulent teenage years and his early twenties. How long had he lived? Where did his life take him? The last trace I have of William is a silver lining in the form of a marriage certificate – in Chesterfield (UK) in 1920 he married a Miss Amy Clarke. I do not know where they went, what they did, whether they had children. But I like to tell myself that after the savagery of World War I, William had the happy ending that he deserved. Perhaps one day, I will uncover that happy ending.