Get Yourself Ready! You’re Going to be Filmed with Tattoo Legend Mark Mahoney … in 10 Minutes!. 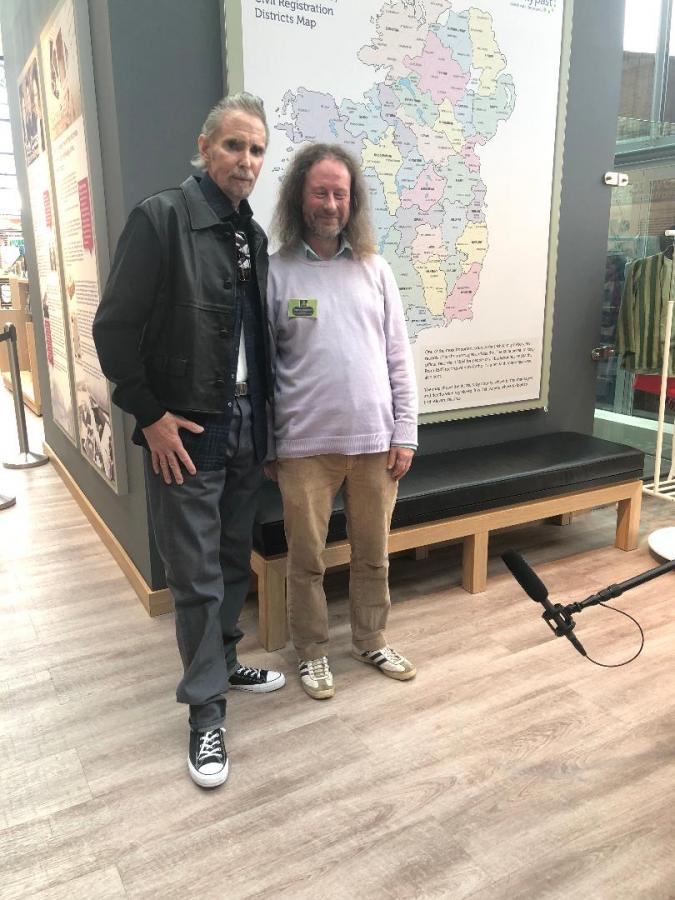 My work day normally starts relatively relaxed. I cycle in to the Irish Family History Centre (IFHC), which is in the CHQ Building in Dublin, have a flapjack and an apple, gaze out at the River Liffey for about 15 minutes and then walk the short 50 metres to work to get in at midday, set up my computer, put on my name badge, and start my afternoon shift – relaxed and ready. That’s what normally happens. Not on Thursday, 4 October 2018.

On that Thursday, I had barely taken my rucksack off when a senior employee from EPIC The Irish Emigration Museum came in and said that world-famous Irish American tattoo artist Mark Mahoney and his family were in the building. Mark is a living legend in tattoo circles (https://en.wikipedia.org/wiki/Mark_Mahoney).

He is the man responsible for tattoos on footballer David Beckham; actors Johnny Depp and Anne Hathaway; singers Britney Spears, Lady Gaga, and The Notorious B.I.G; and reality star Jack Osbourne (son of the great Ozzy) to name but a tiny fraction. Mark is having a documentary made about him, so there is also a film crew. He is proud of his Irish ancestry and owns the Shamrock Social Club, where he and his staff do the tattoos.

I was asked if I could be filmed talking to him about genealogy, Irish history, and about the surname ‘Mahoney’? I said, “No problem, when will Mark be here?” The shocking reply came back, “in about 10 minutes … can you be ready?”

I had just about enough time to squeeze a couple of facts from a surname reference book when in came Mark, his wife Nicole, their daughter, the film crew, and various staff from EPIC accompanying them. It took the film crew only about 5 minutes to get everything set up – very professional, but also very relaxed: they’d done this many times before. It turned out that neither Mark nor Nicole had any questions prepared, I was just to improvise some ‘interesting information’ and ‘go with the flow’. So, I did!

I used the surname screen at the IFHC to start things off, looking at the distribution of the ‘Mahony’ surname (and spelling variants) in the mid-19th century, talked a bit about the Great Famine (1845–52) and its impacts, the different waves of emigration from Ireland, how to trace one’s Irish ancestors from the US side, and what to expect from Irish records themselves. It was all going smoothly. And it continued that way!

I discovered that Nicole’s maiden name was ‘Cotter’. That took things to a whole new, and unanticipated, level. There is a tremendously rare variety of the mineral quartz that is called ‘cotterite’; it was found in Rockforest (County Cork) in 1876 and named after its discoverer, Grace Elizabeth Cotter. I knew all this because I had written a near-definitive review of the mineral in the Irish Journal of Earth Sciences (2016, v34, pp 45-78), which included the genealogy of Miss Cotter herself. Both Nicole and Mark seemed to love this twist to their genealogy tale. I also told them that the surname ‘Cotter’ is one of the very few Irish surnames that is definitely of Viking origin. Mark’s daughter beamed when I pointed out that, because of her parents, she had both native Irish and Viking blood in her.

The filming went on for 35 minutes, and all in the midst of otherwise ‘normal’ IFHC business. Towards the end, Nicole asked to take a photo of myself with Mark: I blinked at just the wrong moment! I have to say, though, that Mark was a genuinely cool guy: really friendly and relaxed, and engaged in everything that was said. One definitely felt the ‘presence’ of a great, yet beautifully understated, talent. In short, he was a pleasure to be with. Quite unbidden, he wrote a lovely comment in the IFHC Guest Book.

I have no idea if any of what was filmed will make the final cut. Apparently, this is a major project that has already had Mark Mahoney being followed and filmed for the last year-and-a-half. But if I hear that the documentary is ready to broadcast … I’ll let you know.