Joe Biden’s Irish ancestry tells a fascinating story of immigration and determination, leading to him becoming the 46th president of the United States. We were delighted to research Joe Biden’s Irish connection in time for his trip to his family’s ancestral home.

We met with the president to share our research on his Irish family history. In response to our findings, he stated:

“Stories get passed down in families, and tales can be changed as they’re passed on… What these ladies have shown me is how accurate my mother’s, uncles and grandfather’s stories were. I’ve waited my whole life for this”.

Keep reading to discover the Irish beginnings that led to the day Biden was sworn in and took his new role at the White House. We’ll explore Joe Biden’s Irish roots, family names before the Biden surname, and exciting stories from Joe Biden’s family history.

The Blewitt Family of County Mayo

This surname has many variations, including Blewitt, Bluett, Bluet, Blueit, Bluitt, and Blewett. The name is rare in Ireland, with the largest concentration in County Cork. Throughout this article, we’ve used the spelling from the original documents. Otherwise, we’ve used Blewitt as the most consistent version.

Our first documentary evidence for Edward Blewitt is in the parish records for Kilmoremoy, in the picturesque town of Ballina. Here, Edward and Mary Mulderg had four children – Gertrude, Patrick, Arthur and Geraldine. Ambrose Finnegan wanted to marry Geraldine, and after their marriage, they had a daughter who was Joe Biden’s mother.

Among these children was the president’s great-great-grandfather, Patrick Blewitt (1832-1911). Unfortunately, Kilmoremoy’s parish records only list baptisms and marriages starting in 1823. So, we couldn’t determine the exact year Edward Blewitt was born.

While the parish registers have limited us, we’ve uncovered a wealth of new research on Edward Blewitt’s career. When the army engineers of the Ordnance Survey arrived in town, Blewitt went to work as a surveyor.

The Ordnance Survey systematically plotted each ditch, hill and stream, and this job served Edward well over the years. He spent nearly three years with them until the work in the area was finished.

The Family’s Encounter with Famine

The next job Edward Blewitt did was as a geographical surveyor and valuer, or an apploter, for Griffith’s Valuation office. The evidence for this employment includes an example of Edward Blewitt’s handwriting in a letter to Dublin Castle in 1845.

The Famine began in Ireland in 1845, and Ballina and County Mayo were among the worst-hit areas. In February 1848, Edward Blewitt found work as an overseer for the Ballina Union workhouse.

This wasn’t easy work, and Edward would have seen the worst effects of the Famine. The workhouse, built to accommodate 1,200, catered for up to three times that number as people came in search of relief.

Patrick Blewitt was born in Ballina but left Ireland in the autumn of 1850 to settle in the US and become a sailor. By 1851, he had returned to Ireland to bring his parents and siblings to America.

Patrick had a son in New Orleans in 1859 named Edward F. Blewitt, after his paternal grandfather. Perhaps his grandfather told him stories of theodolites, maps and tramping the boggy fields back in County Mayo.

By 1860, the Blewitts had settled in Scranton, Pennsylvania. Patrick Blewett had stopped sailing and began working as a mining inspector. While based in Scranton, Patrick also worked in South America.

Edward was hired as a weigh-master in the Ox Pond mines. In 1872, he died in a drowning accident.

His grandson, Edward F. Blewitt, graduated as a civil engineer. He went on to work as a city engineer for Scranton before his election to the senate in 1907. 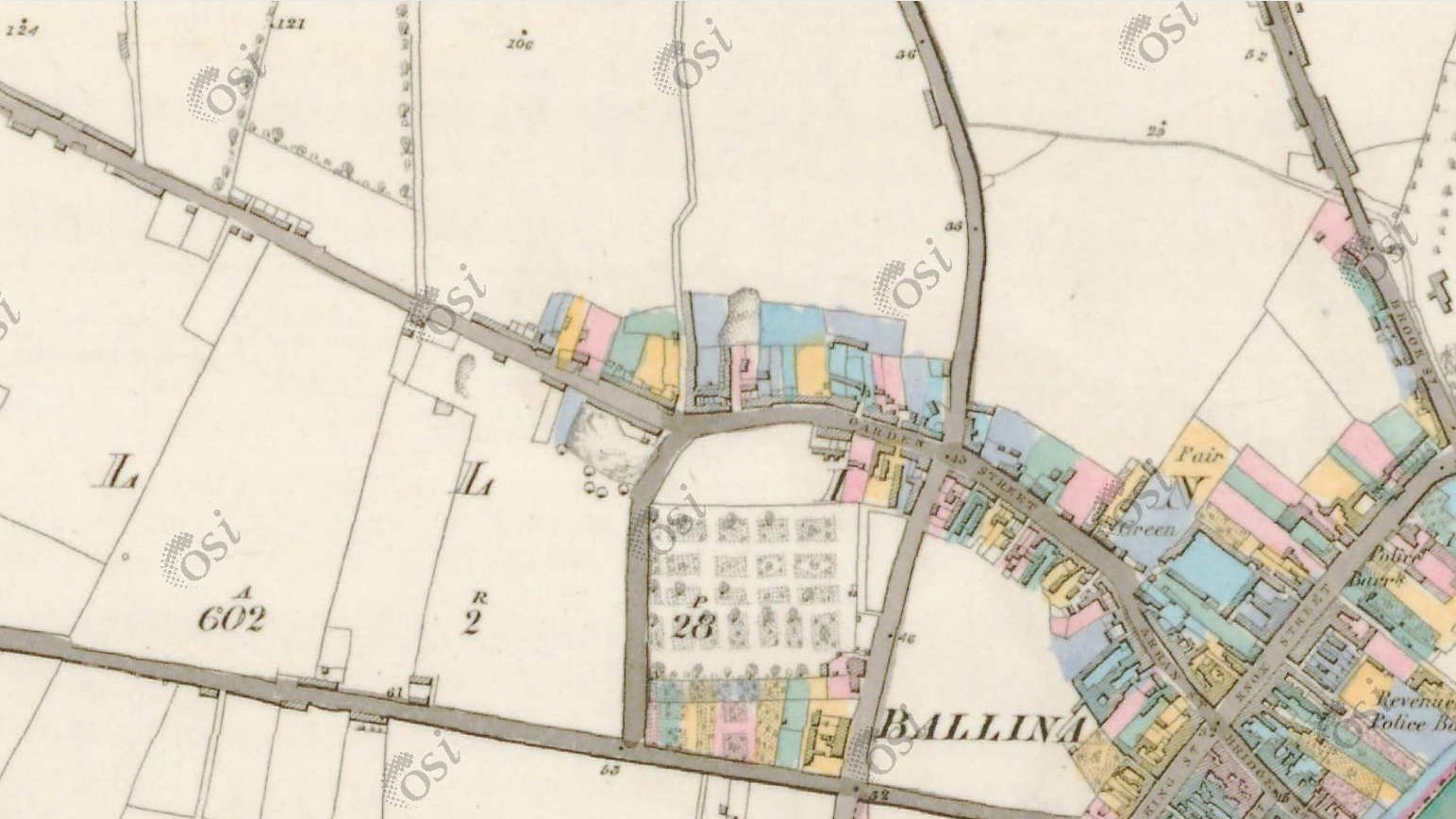 Owen Finnegan, Biden’s great-great-grandfather and son of John Finnegan and Mary Kearney, lived from 1814 to 1874. He left Ireland in the late 1840s, bound for America. Previous research by genealogist Megan Smolenyak identified Owen’s marriage in 1839 to Jean Boyle in County Louth.

The new information we found was that Owen and Jean’s first four children were born in Ireland. Among them was President Biden’s great-grandfather James Finnegan, born in 1840.

An in-depth study of Irish parish, tax and land records and American census, death records, burials and newspapers indicates that the president’s family originated on the southern coast of the Cooley peninsula. We confirmed Owen Finnegan’s baptism in 1814 in Templetown. The Finnegan family lived and worked here, deriving an income from land and sea.

Why Is Maranatra Central to the President’s Family History?

The president’s ancestors in the Kearney and Finnegan families harnessed their entrepreneurial spirit by harvesting seaweed in Maranatra in Templetown. We traced these families to the area from 1766.

Maranatra is a narrow strip of coastal land on Templetown that juts into the sea. The name stems from the Irish mharadh na tra, meaning living on the seashore. President Biden’s ancestors’ first language was Irish.

Most Irish people would have been bilingual then, but English was a second language in Cooley. When Owen Finnegan and Jean Boyle settled in America, they adopted English as their primary language for the first time.

A great deal of seaweed washes ashore in Maranatra. The president’s ancestors noticed this, and they leased salvage rights on this slight stretch of coast. They also harvested and sold seaweed to their neighbours as it contains nitrogen and works well as manure.

One of the few mentions of President Biden’s ancestors in the Blayney Balfour, or Townley Hall, estate records is around 1770.

[105 acres of Templetown leased to William Guys the wreck of the sea … has been for many years leased to Carney undertenant at…The kelp is leased to Carney, but he sells the manure of seaweed to other leaseholders at the rate of eight shillings from as much as…[a hundredweight?]

The Finnegan family seems to have maintained strong ties from Ireland to America. By 1874, Owen Finnegan was in poor health. He planned to close his business and intended to auction his stock on June 17, 1874. He died of heart failure the day before the auction. His wife Jean died six months later, in December 1874.

We found a newspaper notice concerning the administration of Owen Finnegan’s will. It revealed that by 1875, the young Finnegans were scattered across America from coast to coast.

Owen’s son, James Finnegan, married in his adopted hometown of Ovid. Eventually, he moved to Olyphant, Pennsylvania, near Scranton, where the Blewitt and Finnegan families settled. 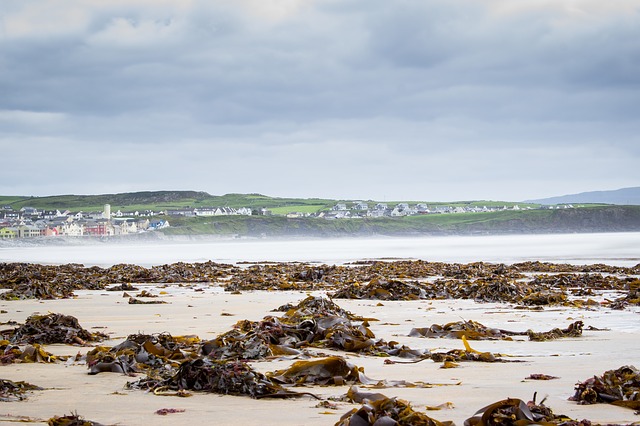 Look at some images from President Joe Biden in Ireland and his trip with researcher Fiona Fitzsimons to his ancestral homestead. She shares her experience travelling with the president:

In April 2016, I was invited to a private meeting and asked to prepare a family history for President Biden before his trip to Ireland. The president wanted to learn more about his family’s earliest origins, identify where his ancestors lived, and trace any living relatives in Ireland.

To ensure I could complete the research before Biden’s visit, I enlisted my colleague Helen Moss, one of the more notable genealogists in Ireland. We received the president’s family history files and a published article by American genealogist Megan Smolenyak. 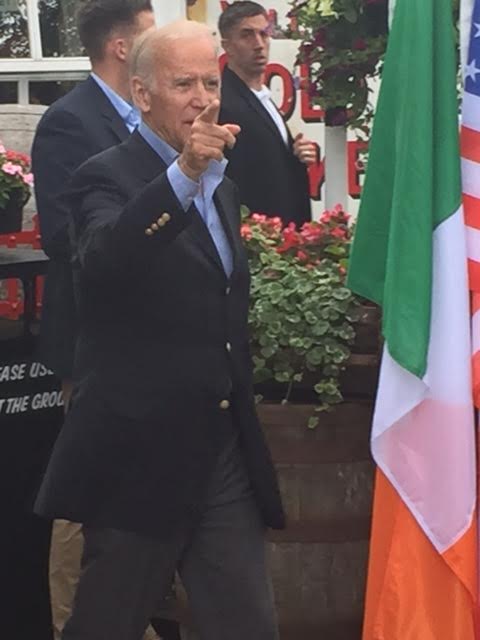 Does Joe Biden Have Relatives in Ireland Today?

As we explored whether President Biden had any Irish cousins, we researched his relatives that stayed in Ireland after his ancestors left. As it turns out, many of the Blewitt and Finnegan families emigrated or lost their lives during the Famine.

Some members of the Finnegan family are scattered in Cooley. The president’s strongest familial links in Ireland are with the Kearneys—his great-great-great grandmother’s family.

On the morning of Wednesday, June 22, Helen Moss and I went to the US ambassador’s residence in Phoenix Park to present the president’s Irish family history. The National Library and National Archives provided original documents and copies as visuals to support my presentation.

Like their ancestral family, the Blewitts, who crossed the Atlantic in 1851, President Biden travelled to Ireland with his extended family. He came with his siblings, Valerie and Jim, and his sister-in-law Sarah. He also brought his daughters Ashley and Missy and five of his grandchildren. His wife, Jill, did not attend.

The extended Biden family were the audience every professional genealogist hopes for. They were interested, asked thoughtful questions and picked up on even the most minor details.

Around Ireland with President Biden’s Party

After presenting President Biden’s family history, the embassy took formal photos and Helen, and I took informal selfies with the president. Once the formalities were over, I joined the president’s party on a road trip around Ireland.

Over the following days, I met an extraordinary mix of people from varying backgrounds. Conversations revealed a much larger canvas of the world. But even from my vantage point on a small island in the North Atlantic, I could recognise the roots tying these individuals to the same place.

By day three, the road trip turned into an endurance test. I felt the fairies had run away from me. I knew what Wellington meant when he said, ‘make water while you can.

Thank you, Anna, Rachel, the two Sams, Leigh, the two Meghans, Caroline, Kevin, Mark and Kristin, for a different perspective and for adding to my enjoyment of the trip.

In Louth, I shook hands with President Biden and his brother Jim Biden one last time. Then, I got back on the bus to go home.

Turn to the Experts When Researching Your Irish Roots

You may have first become aware of Joe and Jill Biden from the US campaign trail, when Barack Obama was in office and Biden began his vice presidency. Later, he became president-elect Joe Biden and eventually President. However, this family has a fascinating story with strong ties to Ireland.

Joe Biden is proud of his Irish family history, and rightfully so. He celebrates St. Patrick’s Day and, on several occasions, has quoted famous Irish poet, Seamus Heaney in his speeches, citing that he is his favourite.