Barack Obama is directly descended from the Kearneys of Shinrone and Moneygall Co. Offaly. The height of this family’s prosperity was between the 1760s and 1780s, when the nephews from Offaly stepped into their Dublin uncle’s business of wig-making (also known as peruke- or periwig-making).

People wore wigs because they didn’t wash their hair; water was thought to spread disease. Wigs were not just a luxury item, they were worn by professionals, the gentry and the aristocracy, but also by many of the staff in big houses.

If we look at the Kearney family that settled in Shinrone, Co. Offaly from the 1740s onwards – Obama’s direct line – Joseph Kearney, President Obama’s 7x great-grandfather, was born ca. 1698 and had four known sons:

Of these sons, Thomas followed in the profitable line of business established by the senior branch of the family, and he became a peruke-maker (as evidenced by a lease dated 1768). Joseph became a comber i.e. textiles/weaving (1761 Marriage License Bond, Diocese of Killaloe).

After the 1780s the fortunes of this line of the Kearney family went into fairly rapid decline.  What might have caused this decline?

Changes in fashion: by the early 19th Century, the fashion was to wear more natural styles, and the style was to decorate and dress their own hair rather than wearing an ornamental wig. Wigs were reserved for the legal profession.

The Act of Union 1801: this created the United Kingdom of Great Britain and Ireland, and abolished the Irish parliament, so that MPs elected in Ireland now sat in Westminster. The political establishment moved out of Dublin to London, and as they did so, they kept town houses in London during the sitting of Parliament. The market for wigs would have been predominantly among this elite, who suddenly vanished from Dublin.

The very success of the Dublin Kearneys: Michael Kearney d. 1762 – invested his profits in property in Tipperary/Offaly, and in the expanding city of Dublin. His investments did very well, and provided good dowries for his daughters, and a university education for his sons who were trained for the higher professions. John Kearney (son of Michael Kearney, bap. 1741 St Andrews Church of Ireland, Dublin) was provost of Trinity College Dublin from 1798 to 1806 when he became Bishop of Ossory.

Tracing the history of the Moneygall/Shinrone Kearneys, in the following generations William (1762-1828) and his son Joseph (ca. 1794-1861) both became shoe-makers, and there’s no evidence to suggest that they continued to transport their goods to Dublin for sale. In other words they were shoe-makers for a rural district, where the nearest market town was Roscrea. They did however retain some property rights in Moneygall and Shinrone, as a direct consequence of the family’s prosperity in an earlier generation.

In fact Joseph Kearney only appears to have sold/released his rights to property in Moneygall in 1851 (see Landed Estates Court sale document – In the matter of the Estate of the Rev. William Minchin, 27 Nov. 1851). It is probable that he did so to finance the family’s emigration to the United States. 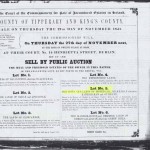 Click on the image above to see a copy of the Landed Estates Court (LEC) sale notice. 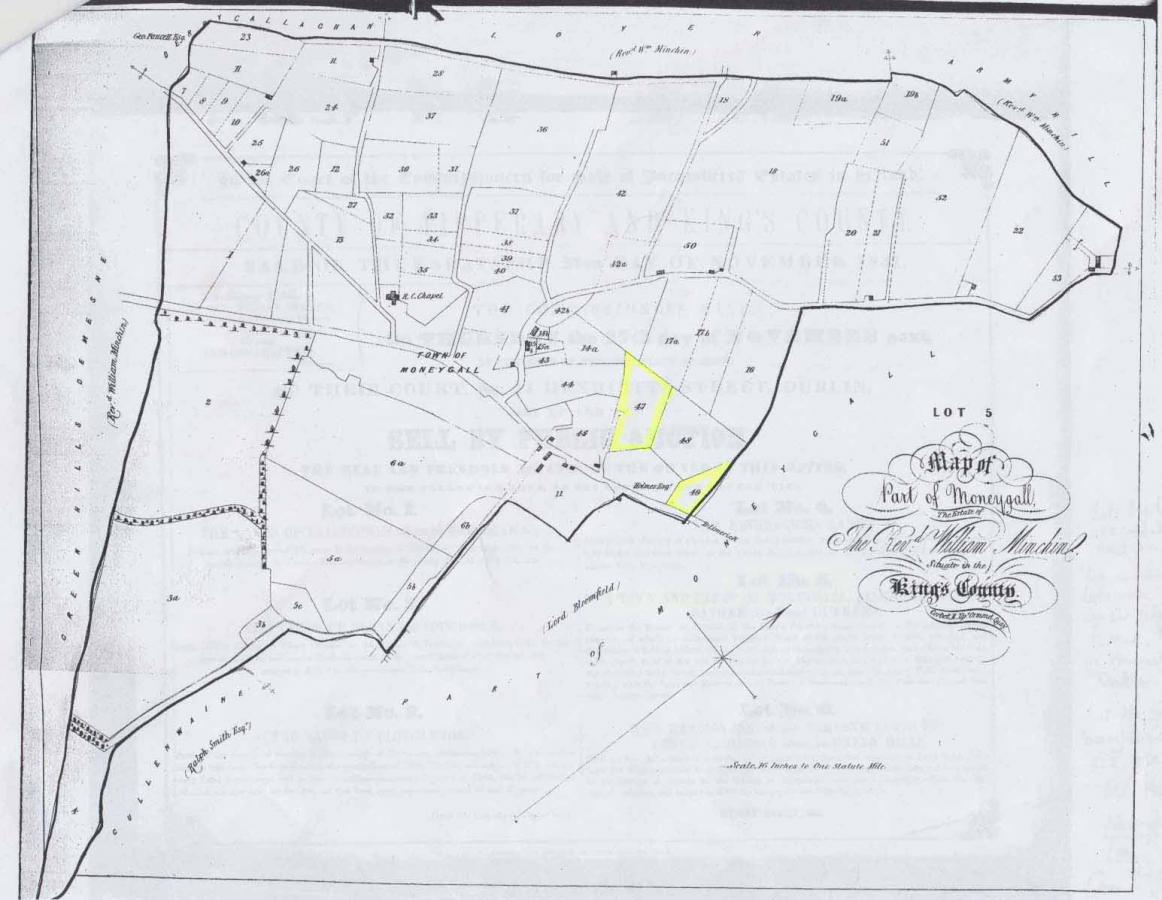 To see a map of the land referred to in the sale notice, click on the image above.

If you are interested in finding out more about the Landed Estates Court Rentals, you can view them online at findmypast.ie.