Earlier this year, our Research Director, Fiona Fitzsimons, published the following article for Ireland Reaching Out. Among many other examples, she describes the value of artefacts from Dunkirk, specifically the evacuation, a topic very much in the news given the recent release of the new blockbuster film of the same name.

Family artefacts handed down through generations are a physical link to the past, with memories and stories attached to them. A hospital wrist-band so tiny it could only encircle the wrist of a new born child, a dried rose worn as a button-hole on a wedding day, beads loosed from a necklace. Fiona Fitzsimons, one of Ireland’s most respected genealogists, opens her own family history keepsake box and reveals its stories to us. 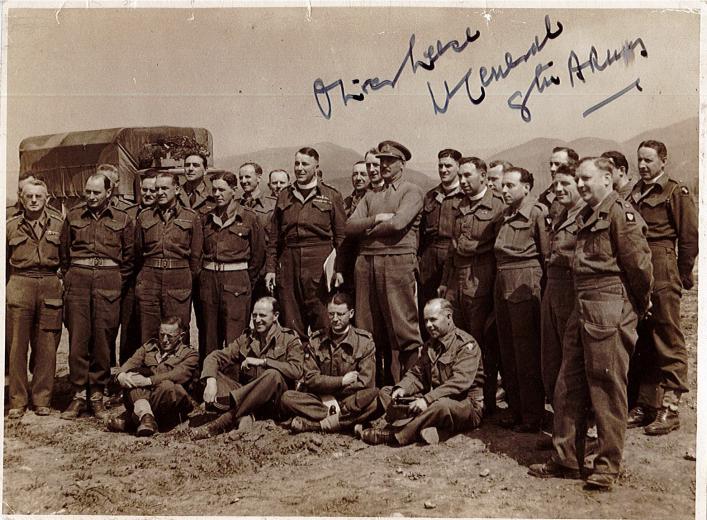 Evidence can come in many formats – documents, receipts from a wedding breakfast or funeral wake, letters post-cards and telegrams, old photos and cine-camera footage, newspaper cuttings, and artefacts – the simple mementoes we keep to remind us of key life events.

The keen genealogist is always on the look-out for anything with names, dates, place-names or even a story attached to it, relevant to their family history. Here are some of the stories that I’ve heard, researching my own family and working with genealogy clients over twenty-five years.

Old photos can tell a story and spark conversation. Above is a picture of my great-uncle Willie Scanlan born 1911 in Annacotty, Limerick. At the outbreak of WWII, Willie enlisted in the British army, in Salford, England where he was living.

In 1940 he was one of the British Expeditionary Forces evacuated from Dunkirk. In 1941 he was assigned to the 8thArmy. He fought in the desert wars and was at the Battle of El Alamein. He took part in the Invasion of Sicily and was with the army as it fought its way up the Italian peninsula.

In the 1970s my granny often took down Willie’s photo-album from the shelf. We turned the pages together, following the 8th Army’s progress in the war; marvelling at the pyramids in Egypt; the great stretches of Libyan desert pitched with tents; and the ruins of Monte Cassino in Italy.

As we thumbed our way through the album, granny told me that her youngest brother’s letters arrived at irregular intervals. By 1943 news was heavily censored, but dreadful accounts of the war reached Ireland, and the family often feared the worst. As Willie’s letters arrived, they were eagerly shared and discussed. In retrospect, I realise these stories told in the 1970s were my first grounding in family history.

One of the most poignant family heirlooms shown me, was a little brooch fashioned to look like a rose. In the 1840s it was given by a country-man to his wife, when they visited the city. The cause of the visit was to consult a doctor about the health of their only daughter, Anna who was seriously ill. She died before her sixteenth birthday, probably from T.B, and her parents brought her home for burial in the family plot in Kilbride, county Wexford. The brooch has passed down through six generations of this family, and Anna’s story is retold each time.

On a cheerier, and altogether more satisfying tone, Dick and Daphne Benn showed me an old bread-tin from the family bakery in Roscrea county Tipperary, dating from the 1920s. Dick Benn is the real cousin of former President Obama, descended from the family that stayed in Ireland. Over tea and delicious scones, we traded stories about Benn family history. Me, talking about archival research using documents; he, telling family stories passed down nine generations of his family who have stayed on the farm. I found out where all the bodies were buried; the properties of Charleois cattle; and the Benn’s exuberant ventures as entrepreneurs, as bakers and iron-mongers.

One of the most unusual artefacts that figured in a research case, was a ship’s figure-head from a wreck. In the 1860s, a bleached wooden figure of a lady washed up on a beach. The bleached figurehead probably dates from the 1700s, based on her dress. It has been suggested that the ship she came from, may have been American. The story of the boy who found her, was published in a local newspaper.

The last artefact is a personal one I inherited from my late aunt Susan Augusta Fitzsimons.  It’s a child of Prague dressed in blue and gold robes, so small it fits in the palm of the hand. I see it every day in my kitchen, and it always makes me smile and think of her. My aunt and the ‘child’ share some similarities, not least the ‘child’ has a helmet of curls similar to Gussie’s trademark hair-do. They both have the same brassy confidence, dressed to the nines as if every day was a feast-day!

Disclaimer: No artefacts or photos were damaged in the writing of this article. Every piece has been returned to its proper owner, to be passed on to future family custodians.

Some tips for documenting your family artefacts and photos