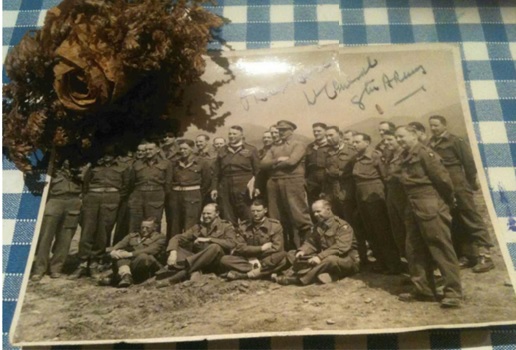 Photographs can prompt conversations, but artefacts contain stories within them, and give us an immediate connection to the past

Photographs can spark off conversations, but what about artefacts -personal and family me­mentoes that we preserve in boxes or the back of drawers.

Family keepsakes that are always precious though rarely valuable: a hospital wrist-band, so tiny it could only encircle a new-born's wrist; a rose worn as a button-hole on a wedding day that crumbles at the touch­stones polished smooth by the sea, picked up and pocketed on a trip to the beach; loose beads from a necklace. These personal artefacts contain stories within them, and provide a visceral link to the past. In this article, gene­alogist Fiona Fitzsimons tells some of the stories she has researched, based on family artefacts.

A toy-dresser bought at Christmas 1945 in Woolworths in Dundalk, for my mother who was at that time eight years old. The dresser originally had three shelves with hooks to hang cups from and at the base there were two drawers and cupboards on either side for pots and pans. In the 1970s the hooks were still there but are now lost, and one of the doors has fallen off its hinges. A few years ago, during the boom when I first got a job and had money in my pocket, I tried to get this little dresser fixed up. I brought it to two restorers, but both of them turned down the job telling me that it would cost more to repair than it was worth, completely missing the point that to me this little dresser is priceless.

In researching family histories I am regularly shown unusual family artefacts. Here is one of the quirkier ones.

On 31st April 1911 William ScanIan was born, the youngest of five children of Thomas and Anne Scanlan of Annacotty county Limerick. Unusually he was born covered in a caul – a thin translu­cent tissue that covered his head and body so completely that it looked as if he was born inside a cocoon. The midwife carefully cut the attachment points of this 'second skin' and preserved it by winding it onto paper, then gave it to the child's mother for safe­keeping.  In doing so, she was following one of the oldest folk traditions in Europe. Tradition­ally a caul was seen as a sign of good fortune, and was even thought to protect the bearer from shipwreck or drowning.

As an adult William Scanlan studied to be a priest, and in the 1930s he secured a parish in Salford in Manchester. Before leaving Ireland, his parents gave him a wallet, containing some banknotes and an envelope that held his birth caul. On the outbreak of WWII, William enlisted, and was sent to France where in May 1940 he was evacu­ated from Dunkirk. Afterwards he was appointed as an RC chaplain to the 8th Army, and between 1940 and 1945 participated in the North African campaign in Egypt and Libya. Subsequently he served in the Italian campaign, from the invasion of Sicily to the Battle of Monte Casino. In 1945 he sustained a broken leg, and finished the war convalescing in Italy. He carried his caul with him throughout the war, as a token of his enduring family ties.

"In 1945 he returned to his civil­ian life as a priest in Salford. He had achieved the rank of Major, and later received an O.B.E which he brought with him on one of his many visits to Ireland, to show his young nieces and nephews.

In 1962 his eldest niece celebrated her engagement to a sailor and William conscious of his own posi­tion as an ordained priest, but aware too of the potency of tradi­tion and ritual, gifted his 'birth-caul as a talisman to the young couple joking that "he had finally found a use for it."

Fr. Willie's birth-caul has been handed down to the succeeding generation, and survives to the present day as a family curiosity.

The other artefact I inherited from my late aunt Gussie, formerly of the Royal Victoria Hospital in Belfast and Dublin. The object in question is a child of Prague dressed in blue and gold robes, so small that you can hold it in the palm of your hand. My aunt and the 'child' share some similarities, not least the 'child' has a helmet of curls, very like my aunt's trade­mark hair-do; and they both have the same brassy confi­dence, dressing to the nines as if every day was a feast-day. 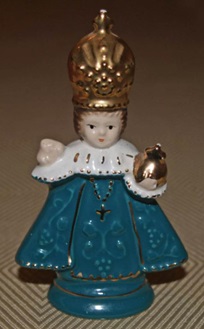 What family keep­sakes or artefacts have been passed down in your family?