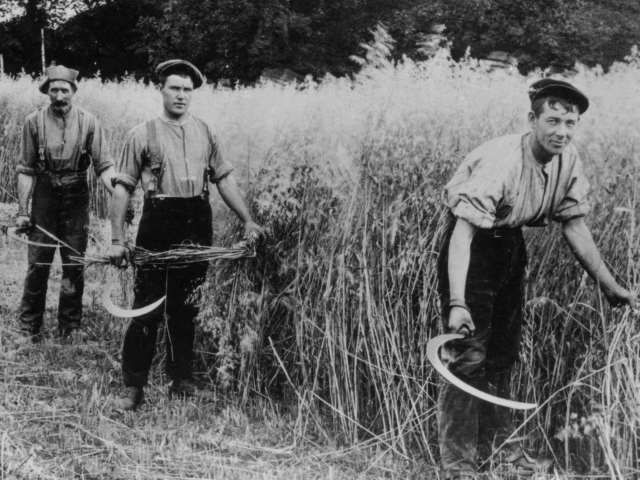 Tracing agricultural labourers provides a challenge to us as family historians.

The number of agricultural labourers reached a peak in the generations before the Famine. Is it ever possible to trace this social group when we have no census or civil records, and incomplete church registers?

Yes, I believe we can, but first let’s take a step back and consider who this community were.

In 19th Century Ireland, there was more than one kind of agricultural labourer.

There were cottiers – paid by a few acres of land; there were seasonal labourers, men who had their own small-holding but who hired themselves out in the ‘hungry months’ (June to October) to supplement the family income; and there were the wandering labourers – the spalipín fánach, taken on at the hiring fair for an agricultural season. Of course, there was a huge amount of ‘cross-over’ between all these groups.

Cottiers and seasonal labourers are the easiest to trace, because even if the tenure of their small holdings was ‘at will’, in 19th Century Ireland land is better documented than people.

We can use the House, Quarto, Tenure & Field Books published online on www.findmypast.com to trace agricultural labourers. These books are the records of the original survey by the Valuation Office completed from 1830 to 1857. They document in exquisite detail, the small-holdings given in full or part-payment of wages.

If you are tracing a cottier, paid for his labour with land, look for the surveyors notation – “pays no rent”.

But what proportion of agricultural labourers will we find documented in the land-records?

The 1836 Royal Commission on the Poorer Classes, tells us that 52% of all agricultural labourers in Ireland were paid by land. It’s still only half, but I’ll leave the “half-full/ half-empty” argument to somebody else.

The critical thing to remember is that it is in fact possible to trace even the most marginal groups in Irish society, in this key generation before the Famine.

The 1836 Royal Commission on the Poorer Classes, available on EPPI

Never again will I go to Cashel,
Selling and trading my health,
Nor to the hiring-fair, sitting by the wall,
A lounger on the roadside,

The bucks of the country coming on their horses,
Asking if I’m hired,

My Gt grandfather was a farmer don't know if he owned or was a tenent.