‘Virtually every town and village had someone who died in the war’.

As John Meagher from TheIndependent.ie discovers, researchers here at Eneclann are hard at work digitising the records of Ireland’s war dead so that they shall never be forgotten, Brian Donovan Eneclann Researcher and Director gives us his take on World War 1 and how “We owe it to these men who died in this war to ensure that their contribution isn’t written out of history” Read the full article here. 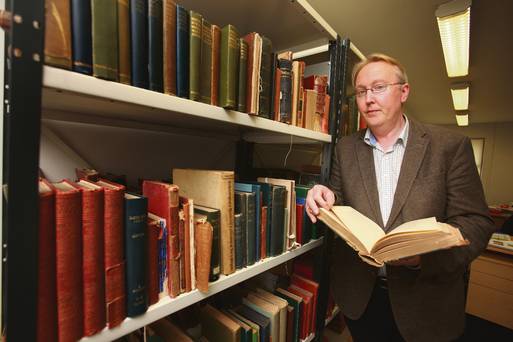 The offices of Eneclann are to be found in a non-descript building on busy Aungier Street inDublin‘s south inner city. Thousands walk by every day and have no idea that it is here that vitally important work to commemorate the Irish men who died in World War I is being conducted.

The genealogy and history research company has been digitising the records of all 49,000 from this island who perished in one of the most savage wars the world has ever seen.

The exhaustive project is being carried out alongside tech giantGoogle and the Belgian World War 1 museum, In Flanders’ Fields, which was named after the famous war poem from Canadian lieutenant colonelJohn McCrae.

Brian Donovan, the historian who established Eneclann with his wife Fiona Fitzsimons in 1998, says the painstaking work has brought home to him the enormous scale of the carnage.

“In one month alone, July 1916, more Irish – some 4,669 people – were killed than during the 40-odd history of the Troubles,” he says. “That is not to diminish the horrors of The Troubles, but it gives a sense of the enormous numbers of Irish men who lost their lives. Could you imagine that number of Irish people dying in a single month in 2014? There would be uproar.”

Spend even a short time with theTrinity College history graduate and one gets the sense of a man who is anxious that Ireland’s war dead be given their due once and for all.

“For too long, their contribution was forgotten about in this country, or swept under the carpet, because it did not fit with the republican narrative,” he says. “And yet, there wasn’t a single family in the aftermath of the war that hadn’t lost a son or knew someone who lost a son.

“Those who did survive returned to an Ireland that was either uninterested in their experience or simply not able to understand just what they had been through. Some faced open hostility due to a perceived notion that they had been unpatriotic. It is only in more recent times that their bravery has finally been acknowledged.”

Brian Donovan’s grandfather was one of an estimated 200,000 Irish men who fought in World War I. “His name was Rickard Donoghue and he survived the conflict. He was a submarine officer and I often think about the cramped, dangerous conditions he would have had to work in. Submarines were so new and crude back then.

“He died in 1952 when he was 54 years old. Like so many Irish men, he was very young in the First World War. You had to grow up quickly back then – it wasn’t uncommon to be a commander on a submarine by the age of 18.”

The tragedy of war is heightened by the fact that it’s predominately slugged out between young men on both sides of the conflict, and World War I was no different. Boys as young as 14 were permitted to join the British army.

“When you analyse the ages of the Irish who died, you’ll see that most were in their 20s but almost one in five were teenagers,” he says. “The youngest Irish soldier to perish was just 15. He was Lance Corporal Charles Brown, who was from my neck of the woods – Ferns in Co Wexford.”

For most of the Irish, the war was fought on land – with many experiencing the attritional nightmare of the trenches in France andBelgium. It is no surprise that the month mentioned by Donovan – July 1916 – coincides with the Somme, still one of the most savage battles in history. And it’s likely that most of those 4,669 Irish soldiers died in the trenches there.

Eneclann – which is an ancient Irish word concerning the price of one’s reputation – used as its source material the eight volumes of a 1923 book, ‘Ireland’s Memorial Records’, which collected the names of all the Irish who were killed in World War 1 and numbers around 3,000 pages.

Commissioned by Field-Marshall Sir John French, Lord Lieutenant of Ireland (1919-1922) and honoured by the British as the First Earl of Ypres, the leather-bound volumes were lavishly illustrated by Harry Clarke, who is best known as Ireland’s most significant stained glass artist.

Today, copies are housed in the small book rooms at the National War Memorial Gardens at Islandbridge inDublin and can be viewed by appointment through theOffice of Public Works. The digitisation project from Eneclann, Google and the In Flanders Museum will ensure that the resource can be accessed by all online.

Incidentally, the War Memorial Gardens had been allowed to fall into ruin for much of the 20th century, but have subsequently been beautifully restored. The location was a pivotal stop during the visit ofQueen Elizabeth here in 2011. Its changing fortunes, Donovan believes, has been something of a microcosm about how old perceptions of Irish involvement in the war have faded or been revised.

A newfound appreciation of the Irish contribution to the war effort arrived as late as 2006, with events to mark the 90th anniversary of the Battle of the Somme taking place throughout Ireland. “1916 is obviously a very significant year in Irish history,” Donovan says, “but not just for the events in Dublin that Easter.”

Over the years, Donovan has encountered several erroneous statements concerning World War I passed off as fact – chief among them, the notion that most Irish soldiers were unionists from the northern part of the country. “It used to be said that most of those who died were from what’s nowNorthern Ireland, but that wasn’t the case at all,” he says. “Every single county in Ireland had a significant number of casualties, with places like Cork (2,244 dead) particularly hard hit.”

The data that Eneclann has gathered makes a mockery out of the suggestion that World War I affected northern counties more than southern ones. For example, 1,050 Tipperary men perished in the war, and roughly the same number – 1,059 – were from Tyrone.

To put the scale of those figures into context, the 1911 Census shows that there were 152,000 people residing in Tipperary – and, to extrapolate from that, one in every 76 men from the county were killed on foreign fields between 1914 and 1918.

County Dublin, with 4,918 dead, had the highest number of fatalities after Antrim (which accounts forBelfast – then almost as populous as Dublin city) but even a county as sparsely populated as Leitrim had its own significant death toll too (250).

“Virtually every town and village in Ireland had someone who died,” Donovan says. “Its reach was immense. We owe it to these men to ensure that their contribution isn’t written out of history.

“There will be many significant centenary events commemorated in Ireland this decade – and the 1910s was a remarkably momentous time – but it’s essential that those Irish people who fought, and died, in the Great War are not forgotten.”

It is hoped that the project will be fully digitised by the end of 2014.