It’s worth celebrating John Ballance’s birthday today.  On this very date in 1839 he was born in Antrim to a tenant farmer, Samuel Ballance and Mary Ballance (formerly McNeice), a quaker. John moved to Birmingham as a young man and using the findmypast website for the 1861 Census we can locate him in Cheapside, Birmingham enumerated as a 22 year-old factor’s clerk, born in Ireland, boarding in the home of Charles Bevan, an iron merchant’s clerk and his family. 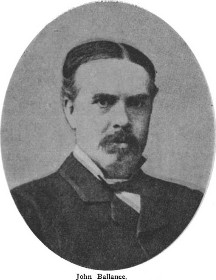 Ballance then emigrated to New Zealand and having followed a varied career, he entered politics and was elected to parliament in 1875.  He was elected Prime Minister of New Zealand in 1891 and died only two years later.  He was a keen advocate of women’s suffrage and New Zealand was the first country to introduce the right of women to vote.  New Zealand women had their first opportunity in 1893, although John Ballance did not live to see it.

At Eneclann we frequently refer to electoral registers, we’re fortunate in that if we are tracing a Dublin city family we can track them from 1938 to 1964 in the Dublin City Library and archive reading room using digitised records.The 1939-1940 electoral list is available online at.