Everyone with an interest in Irish genealogy knows about Griffith’s Valuation, a survey of all property in Ireland, to calculate the local tax rates paid towards the Poor Law system.

Griffith’s Valuation (1847-64) was the third survey by the Valuation Office to calculate what taxes should be charged. Each of the surveys overlaps in time, but produced a unique set of records.

The Field & House Books [aka Quarto Books] are the records of the earliest survey, which started in 1828 and continued to the mid-1840s.

These records include the following evidence: 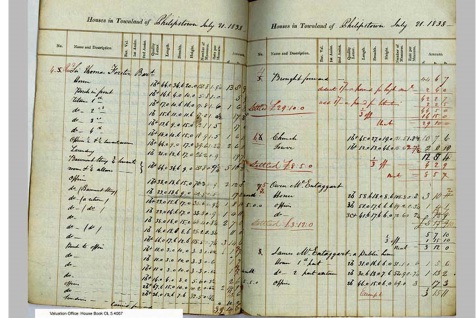 In 1833, Richard Griffith’s issued instructions to his surveyors that set the standard for what information was collected. Henceforth, they were required to:

There’s great confusion, and much discussion, among genealogists about the ‘coded-system’ used by Griffith’s surveyors, to describe property in the House Books.

IT shouldn’t be that difficult, because Griffith issued his own system, reproduced here:

#1.  To indicate a slate roof house of stone or brick with lime mortar

#2.  To indicate a thatch-roof, where the building was of stone or brick with lime morta

#3.  To indicate a thatch-roof, where the building had stone walls with mud mortar or mud walls of the best kind

#4. To indicate a basement stories of a slate-roof house used as dwellings [urban]

A Very substantial building and finish, without cut stone ornament

B+ Not new, but in sound order and good repair

B Medium age, slightly decayed but in general good repair

B- Medium, deteriorated by age and not in perfect repair

C+ Old but in repair

C Old and out of repair

So a building described as being 1 A+ would indicate a house built of cut-stone or brick using lime-mortar, where the build and finish were first-rate and included a slate roof.

Whereas a house described as 1C would indicate a house built of stone or brick, using lime mortar, and with a slate-roof, but where the house was old and out of repair.

Caveat: Surveys were completed by a visual inspection, and can be very subjective –beauty is in the eye of the beholder after all. In my experience there are many instances where the grandeur of a house may be worn down over time. This is particularly the case where houses were not the primary residence, but a town-house, hunting lodge or a ‘rus-in-urbe’ country house nearby the city.

In my own research I’ve assisted in recovering the knowledge of some such houses, including one with an intriguing connection to Dean Swift, but that’s a story for another day! FF.