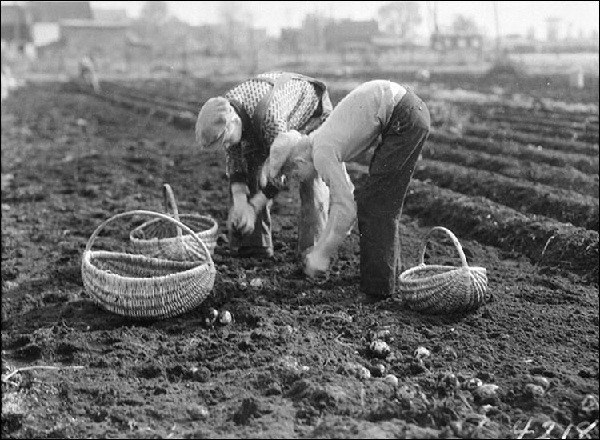 In Ireland, the number of agricutural labourers fell after 1850. Day labourers and seasonal workers, servant boys and girls were employed to work on the farm.

Workers from outside the locality were always cheaper; they came, they went and crucially, as historian Caitriona Clear has written, the farmer didn’t have to look at their hungry faces at slack times of the year.

Tracing landless labourers provides a particular challenge to us as family historians.

We have an incomplete record because of poor record-keeping and archival disasters. The Irish on the move are the least well documented of all – doubly difficult to trace because their records are dispersed.

The 1836 Royal Commission on the Poorer Classes, informs us that over half of all agricultural labourers were paid by land. [Available on EPPI ]

The House, Quarto, Tenure and Field Books were the first and original survey, on which the land tax, known as Griffith’s Valuation, was based. These records document in exquisite detail, the small-holdings given in full or part-payment of wages. Look for the notation – “pays no rent” recorded by the surveyor.

So if you’re researching between 1830 and 1850, there’s a good chance you will find your ancestor in the records of the Valuation Office on Findmypast.